Everyone put on a flower crown and get in a goddess circle, because the Girlfriends’ Guide to Divorce Season 3 premiere on Wednesday gave us plenty of fodder for discussion.

At the top of the list is Jake’s generous, episode-ending offer to Abby: Now that she’s been dropped by her publisher and fired from SheShe (thanks to that whole male prostitute snafu), Abby’s ex says he’ll bankroll their lives, courtesy of his new producing gig in Vancouver. Think of it as a payback for all those years she worked so he could get his professional life together, he says — leaving Abby to consider what she wants to do with her life, rather than what she has to do with her life.

“That’s a big part of these first episodes,” showrunner Marti Noxon tells TVLine. “If you were presented with the opportunity to take a breath, how would you cope with that?”

Before we get to more of Noxon’s insight into the episode — as well as what’s ahead for Abby & Co., a brief recap: 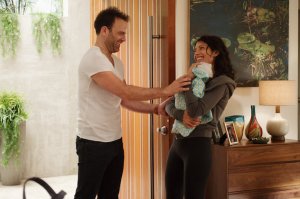 * While babysitting Christopher for Jake (and an MIA Becca), Abby took the baby to the pediatrician because she feared he had a fever. As it turned out, the hot one was Abby: The doctor informed her she was probably having a menopausal hot flash, and gave her a prescription for estrogen patches.

* Spun by the knowledge that her childbearing years were done, Abby suggested that she and Jake raise Christopher. He quickly disavowed her of this idea. Becca eventually returned and took her son back.

* After Abby’s aforementioned firing, Barbara was offered her friend’s old column. She accepted the job, though — as Abby later noted — that means she’s going to have to start dating so she’ll have something to write about.

* Delia decided to move to New York for six months to clear the air after her affair with Albert came to light, but at the last minute decided to stay put and destroy her smug lover, who maintained that she still cared for him.

* After she realized he was drinking heavily again, Jo tossed Robert out and forbid him to see Zooey until he was sober. And after some acrobatic sex in the Rize kitchen, Jo decided to try to get to know Scott better as a person.

* New bride Phoebe received her final alimony payment from her ex-husband, a change she hadn’t previously considered. “I did not think this through when we got married,” she shakily told JD.

Below, Noxon previews what the ladies’ upcoming season might look like. (And make sure to grade the premiere via the poll below.)

TVLINE | Thanks to Jake’s offer at the end of the episode, Abby is free to do almost whatever she wants — for maybe the first time in decades. Is she the type of person who will revel in that freedom? Or is she someone who needs more structure?
You just nailed the key seam of the third season, which we’re calling Girlfriend’s Guide to Freedom. Obviously, Abby’s based on a lot of people, but she’s based on me and Lisa [Edelstein], both, too. There’s a lot of us in that character. We’re both do-bugs; we have a horrible time sitting still. For a lot of women, we cope with our feelings and anxieties by staying in constant motion. We’re definitely going to explore: Is she able to relax and let the next thing reveal itself to her? Or is she just gonna try to solve that problem like she tries to solve every other problem — with greater and lesser success? [Laughs]

TVLINE | We saw Abby’s freakout about it. What does she call herself? A “dried-up skinpod?”
My favorite term for it is “tumbleweed vagina.” [Laughs]

TVLINE | Is menopause something that’s going to continue to bug her? Or will she be able to make peace with the idea that this is something that happens to women at a certain age?
She’s wrestling with it, like all women do. Again, loosely based on both myself and Lisa — one of the things that you have to wrestle with is this idea that suddenly you’re invisible, you’re no longer a sexual being. Because you can’t make babies anymore, you sort of fade. I think how we interpret what the culture says is that we’re no longer relevant. I love my doctor, but he really did say to me — to my face — “We just weren’t meant to live this long.” Which, on the one hand, I was like, “So I’m now in the gravy period. Bonus years.”

But on the other hand, just because men still have active swimmers, that doesn’t make them any more relevant than a woman. That doesn’t make them any more important than a woman. So she’s coping with all of those feelings and finding her way. I think it’s really important. My experience was that I was wholly unprepared for the chemical changes that started to hit me as I neared my 50s. I just don’t feel like enough people talk about it. I feel like if more women were to talk about it, we would have an easier time with it. 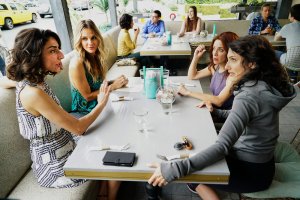 TVLINE | I think my favorite moment in the hour is when Phoebe realizes that her alimony checks are ending.
[Laughs] She just didn’t think it through!

TVLINE | She’s this Earth mother, goddess, at one with the universe, and that’s really easy to do when you have a lot of disposable income —
Yep. Bingo!

TVLINE | — and it’s also easy to be married to a struggling artist when you have that cushion. So I’m wondering how this development will affect Phoebe’s relationship with JD, as well as the way she views the world, as we move into the season.
You just nailed it. One of the biggest character arcs for Phoebe is exactly that. One of the things I think about a lot, as a person who has, I’ve worked hard but I now make a good living and I’m surrounding by the commie pinko Hollywood elite [Laughs] and sometimes we forget how being comfortable allows us the freedom to have these more crunchy, granola-y feelings because we’re not struggling for our survival every day. We’re not working three jobs. So we have time to think about Pilates. So we really wanted to put Phoebe through her paces and it ultimately will make her a much more real human being. But it’s definitely a challenge.

TVLINE | We saw Delia at the end of the episode decide to stand her ground and take Albert down, but he seems pretty certain that she’ll change her mind.
We love the actor who plays Albert [Brian Markinson], and we found in that relationship and in that actor something unexpectedly kind of sexy. But there are going to be some real surprises along the way.

TVLINE | Jo definitely seems like she wants to get to know Scott better, have more of a relationship with him. Does that bear out as we move on?
Yeah, it does. We play that out in terms of the challenges for her in dating a guy that’s admittedly much younger. I really like where it goes. Again, there’s good surprises in store for people who are interested in their relationship.