Keep calm and Witness on.

That’s the gist of Sleepy Hollow‘s Season 4 premiere, the first time we see Ichabod Crane fight the apocalypse without his biblically foretold partner, Abbie Mills. In the wake of Abbie’s unexpected death at the end of last season, Crane is in a strange place (Washington, D.C.) with a team of strangers (including cast addition Janina Gavankar) and a lethal enemy — although he doesn’t know about that last part yet.

Read on as we explore the highlights of Ichabod’s new life in “Columbia.”

FREE ICHABOD! | The hour opens with Ichabod being interrogated by a shady guy in a dark room; as Crane answers, he gives a succinct recap of the show so far. When the subject of Abbie comes up, it gives Ich pause: He tells the man that he and the “leftenant” joined together to fight evil. ” Demons, horsemen of the apocalypse, the ongoing success of shows about real housewives,” he says when asked to specify. “You know, evil.” (Heh.)

From their conversation, we glean that Ichabod has been held against his will for two weeks, but he has very little idea of his captors’ identity or agenda. That changes when he distracts his questioner long enough to knock him out and run; on the way out, Ichabod stops by a room full of series episodic surveillance photos of him and Abbie, books about evil beasties and drawings of national monuments. “Who are these people?” he wonders aloud, but then continues his escape.

When he finally exits the warren of tunnels, he surfaces into a foggy day. There’s a nice visual callback to the pilot as he runs up to a road but then takes a moment before stepping onto it — once nearly killed by a truck, twice shy, I suppose. But then Ichabod falls to the ground as a plane takes off very close to where he’s standing, which turns out to be an active runway at Reagan National Airport in Washington, D.C.

HEADS UP! | In a seemingly unconnected café, a woman bemoans a recent date to a man: The woman is Homeland Security agent Diana Thomas, and she’s chatting with her partner/friend, Eric. Key takeaways: Diana doesn’t like change, and she’s got a daughter named Molly. The partners’ coffee break is interrupted by a call, which summons them to the Lincoln Memorial, because someone has made off with old Abe’s head.

While Eric runs off to check out another area, Diana notices a small, glowing, green rift on the side of the statue. But as she stares, it shrinks and disappears. By the time she catches up to Eric, it’s too late: A scary-looking monster with stringy hair and ye olde garb has killed him.

Diana and Ichabod arrive on the scene at nearly the same time. In the confusion over Eric’s death and who the heck Ichabod is, the monster gets away. Crane introduces himself to a freaked-out, gun-wielding Diana as a “historical advisor” who has helped other law-enforcement agencies, but she’s in too much of a WHAT? DEMON WHAT? WHAT? mindset to be much help. While she’s distracted by another glowing green hole, Ichabod takes off. 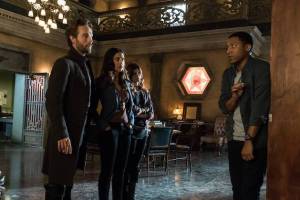 ARCHIVES OF OUR OWN | When Diana eventually gets herself together again, she tracks Ichabod to the place where he was held captive… and finds him there again, having lost the demon’s trail and wondering where all the men who held him against his will have gone. They quickly establish that each is not a threat to the other, they’ve both lost someone important to them and that Diana is a pretty skilled investigator… and then Diana gets a call: The demon has killed again.

At that second crime scene, she mentions that there’s a federal office called Agency 355 that might be able to help; it’s a repository of reports of unexplained phenomenon. (And somewhere, Fox Mulder is tossing sharpened pencils at the ceiling and muttering, “If they say ‘Nobody here but the FBI’s most unwanted, I’m calling my lawyers.”)

The agency is casually known as “The Vault,” and when Ichabod and Diana arrive there, they find that it’s a gorgeous library full of crazy stuff, staffed by two youngun’s: Jake, who handles “news and information” and is jazzed to meet the “Captain Brownbeard” he’s seen in various reports from Sleepy Hollow, and Alex, who’s in charge of “artifacts and machines” and (as she repeatedly reminds us) is more of a skeptic.

JENNY FTW! | With The Vault’s resources at their disposal, and access to (of course!) some sub-D.C. tunnels, Ichabod and Diana quickly realize that the demon is none other than John Wilkes Booth, who summoned the supernatural in order to successfully kill Lincoln in 1865. What’s more, copper is the monster’s weakness, and the American flag is its trigger. (Side note: It’s a stupid little thing, but Tom Mison’s pronunciation of “Superman” during the kryptonite conversation made me laugh out loud.)

So Alex makes a ton of copper bullets, and Ichabod and Diana head for a patriotic festival, where Ichabod lures Booth away from the public by unfurling a flag and singing “The Battle Hymn of the Republic” loudly, if not exactly on key. But they lose the monster once they’re in the warehouse where Jake and Alex wait; when it grabs Jake, the only thing that saves them all is that Jenny happens to arrive in the nick of time, and she has zero learning curve when it comes to firing a gun that shoots sharpened old pennies. Booth becomes copper-plated toast.

“Allow me to introduce Miss Jenny Mills: soldier, scholar, gentlewoman and all around badass,” Crane says after things have died down a bit, and Mison and Lyndie Greenwood pack a lot of stuff into a brief hug between the two remaining members of Team WTF. Later, Jenny reports on her trip to the Himalayas (yak cheese: good, info on finding another Witness: bad), then they lament that Abbie is really and truly gone. And when Crane and Diana meet up at the Jefferson Memorial, he gives her an out, saying that she needn’t join the fight to come, because she’s got her daughter’s welfare to think of. But Diana says Eric’s death means she’s all in.

At her home that evening, Diana goes up to say hi to her 10-year-old daughter. Molly seems like a cool kid, but it’s hard to tell, because she doesn’t speak; following a fainting spell at school weeks ago, Molly hasn’t uttered a word. When Diana leaves the room, Molly stops doing her homework and grabs a sketchbook. When she opens it, we see that every page is filled with drawings of Ichabod. Hmm…

A NEW FOE ARISES | But whatever happened to Lincoln’s missing head? Turns out, it was stolen by Malcolm Dreyfuss, a super-rich entrepreneur who’s deeply into the occult. Like, hoods-and-chanting into the occult. Like, has-a-demon-as-a-bodyguard into the occult. Like, is-very-aware-of-Ichabod into the occult. And when Dreyfuss’ bodyguard, Jobe, busts open the statue’s noggin with his eyes, it reveals a circular tablet. “There really is no amount of blood that I won’t spill to get the rest of these,” Dreyfuss purrs. (So, wait… the Lincoln Memorial just won’t have a head in this universe?)

Now it’s your turn. Grade the season premiere via the poll below, then back up your choice in the comments!