Step aside, iZombie — there’s a new man-eater in town.

Following Sheila’s death (and apparent rebirth) in the pilot, she and her husband (Justified‘s Timothy Olyphant) must work together to keep her cravings under control while selling houses in the suburbs.

Prior to this eye-opening — and mildly stomach-turning — reveal (pictured above), here’s what we thought the show was about:

In Santa Clarita Diet, Joel (Olyphant) and Sheila (Barrymore) are husband and wife realtors leading vaguely discontented lives in the L.A. suburb of Santa Clarita with their teenaged daughter Abby (Liv Hewson), until Sheila goes through a dramatic change sending their lives down a road of death and destruction…but in a good way.

–
Oh, what a difference a few details make.

“We do this sort of Cro-Magnon type of evolution with her over the course of the 10 episodes,” Barrymore tells USA Today. “No gimmicks, no prosthetics, just an awakening. I just really enjoyed just shedding a snakeskin with her, so it became a really fun obstacle that I wasn’t even planning for but seemed so conducive and fun and healthy for my own life.”

Check out a few cheeky ads for the show below: 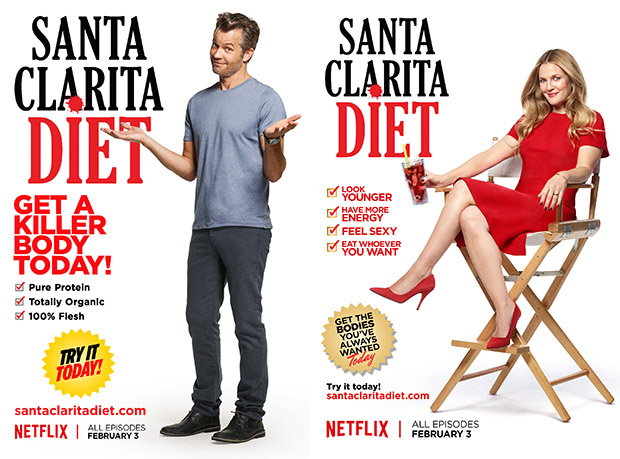 The first season of Santa Clarita Diet hits Netflix on Friday, Feb. 3. According to USA Today, commercials for the dark comedy will begin airing during Sunday’s Golden Globes.

Are you more or less likely to check out Santa Clarita Diet now that you know what it’s really about? Drop a comment with your reaction(s) below.