Need a little relief from the fraught, frustrating realm of real-world politics and foreign policy? Look no further than the Madam Secretary fall finale, which solved huge problems both foreign (Iran-Israel relations) and domestic (President Dalton’s independent bid to stay in office) in under an hour.

“We picked a couple of international issues that we don’t feel are going to be easily resolved anytime soon, or maybe in our lifetime, and then in our fictional world, we gave ourselves some success with two things,” executive producer Barbara Hall tells TVLine.

So the show chose the two hallmarks of Dalton’s administration — “the nuclear peace agreement and detenté with Russia,” Hall points out — and made them begin to fall to pieces on election night. “We wanted to take something that was a huge part of his legacy and see what it looked like if it began to unravel.”

That unraveling took the form of a game of chicken between two ever-warring nations, with Elizabeth and POTUS stepping in a few times to save the planet from nuclear war. Meanwhile, Russell — who collapsed in his office at the end of the last episode — was saved by Stevie, who started CPR and made it so the chief of staff’s heart attack wasn’t a fatal one.

Meanwhile, in the name of national stability, the House of Representatives vote to determine who’d win the White House was moved up. And though Dalton received some damning intel about his opponent — Evans apparently has the gene that indicates he’s likely to experience early-onset Alzheimer’s Disease — the president decided not to use it in order to secure a win.

As it turns out, he didn’t need it. While Russell was convalescing in the hospital after surgery, he received a call from Dalton: They’d won reelection, which conveniently came after the president and Elizabeth negotiated a tricky and tentative peace in the Middle East. But maybe Dalton wants to hold off on taking that celebratory lap around the Oval Office: At a charity run, Evans makes sure to let Elizabeth know that he thinks her team was out of line in trying to get Dalton on the ballot in Ohio, and he plans to file suit and challenge the election results.

Read on as Hall previews how the rest of the season will play out.

TVLINE | Why did you settle on the Israel-Iran conflict for this episode? It’s a huge, weighty, complicated matter.
We’re just trying to imagine where these situations could go and the dilemmas that could come up around them, and we’re always aware that because we’re dealing with stuff that plays out in the real world that we have to handle it carefully, but we try to stay within the realm of reality. What we do is we take things that are happening now, we game them out years in the future, and then — because we’re a TV show — we obviously try to go for the most dramatic version of the story. But we also try very hard, it’s sort of the mission of the show, to depict what diplomacy looks like, why it’s so complicated, why there are no easy answers and what the point of view and the needs of all the people involved are. So yes, it’s scary subject to approach, but it’s very real. 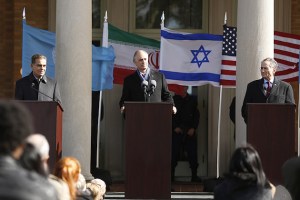 TVLINE | Your election is playing out almost as insanely as the real one did.
We did imagine every scenario, including the election going to the House to be decided. We weren’t trying to get ahead of what would happen in the real election, because we couldn’t. But we did believe, and it’s turned out to be true, that this election would deconstruct the election process in a way that hasn’t been done since I’ve been voting, anyway. We felt like it would give people a language and an awareness of what that process is… We could do a parallel story of a difficult election.

TVLINE | It surprised me when Russell said not to leak the Evans report. Is this a kinder, gentler Russell, moving forward?
[Laughs] Stay tuned! I think it’s fair to say he hasn’t had a personality transplant, but it was interesting to play, to test him in that moment, given his circumstances. What we’re going to move forward with is what the rewards and consequences are of decisions they make in that moment. We’re getting deep into the process of how these decisions affect everybody.

TVLINE | You chose to convey the revelation that Dalton had won the election by having us watch Russell react to the news. Why him, versus showing Dalton or the McCords watching the vote?
We wanted to reveal that decision in the most dramatic way and the most unexpected way, and it’s sort of like what we did with Election Night, which is: How do you make this episode not about waiting to hear what the results are? Well, you create a huge international event that they still have to pay attention to, and as a result, the election becomes secondary, in a way. So we did that. We created this big dilemma for one of our main characters, which was organically arrived at, because the stress on this character has been building all year, for two-and-a-half years, and then we very much wanted to do stories about how life keeps going on in the midst of these enormous moments in history.

Russell has a heart attack, and we felt the person who had been the most worked up about it all and the most trying to manage things behind the scenes should be the person who pays the biggest price, physically. And then we wanted to play that moment on him because people are able to project what it means to Russell. Also, symbolically, it’s everything we’re talking about: how much stuff happens behind the scenes, but in a good way or an industrious way that people might not think about.

TVLINE | Moving into the rest of the season: Dalton’s camp still has Evans’ health report in their back pocket. Will there be discussion about whether or not to use it, given what he’s threatening?
Yes. The next several episodes are about weighing the consequences against the things that you might have to do to make it work. It’s all about the best interest of the country and the world. All those come into play. It’s not just about winning, you know? They have to look at all of their options going forward.