No offense to Black Violin and the Pitch theme song, but Ginny Baker should probably have some fear as the baseball drama wraps its rookie season.

After all, an injury the young pitcher incurs while on her way to her first Major League no-hitter sends her straight into the MRI… and viewers straight into a cliffhanger as the as-yet-unrenewed series enters hiatus.

The incident caps an hour that finds Ginny wanting to discuss that near-kiss with Mike — and him blocking her at every opportunity. We also learn that Rachel has broken up with her fiancé; but after Mike shows up at her hotel room and they have sex, he’s ready to jump back into something with her… and she’s not. (Meanwhile, Ginny sleeps with Noah, who wants to whisk her away on vacation during her break.)

On the Will front: Ginny’s brother confesses that he used some of the restaurant money to pay off his shady business contacts; Ginny promptly asks him to leave. She’s even madder at Amelia for getting involved in family business without Ginny’s knowledge. They have a very loud, very mean fight right before Ginny’s game, and it certainly seems like they’ve parted ways: When Amelia sees news footage of her client’s injury, she only pauses briefly before getting on a plane she’s about to board.

We talked to executive producer/series co-creator Rick Singer about the season-ending episode, Ginny’s take-charge monologue on the mound, Blip and Evelyn’s marital strife, a possible Season 2 and — of course — #Bawson. Read on for the details.

TVLINE | I loved Ginny’s monologue on the mound, which seemed to speak to how far she’s come since the first time we saw her up there, talking to Mike.
That speech on the mound, we felt, was a perfect bookend to the, yeah, speech that Mark-Paul [Gosselaar] gives her in the pilot. And it’s a great representation of how much she’s grown and changed… The course of our first season was about her coming into her own fully, to the point at which she has learned to finally say no and stand up for herself and say no to Amelia, say no to Will, and speak up for herself.

We felt that was a great Part 1 of this, of showing her journey unfold in a way that felt organic and right to us. But then on top of it, the reason that she’s pitching the no-hitter is that, as a result of freeing herself from some of the things that she’d been shackled by before and really holding her own space… she’s able to be free in a way on the mound that she hasn’t been before — and that leads to results that she hasn’t had before.

So she has this incredibly triumphant, fabulous outing that’s building and building toward that great speech with Mike on the mound, where she’s really owning it, and she clearly feels like she’s come into her own. And then, the interesting thing about life is, it still throws you curveballs… That was interesting to us, that as she’s cleared the decks and put herself in a position where to some degree, she has wanted to kind of stand on the mountaintop alone and face everything alone, now she’s in the deepest of the valleys, and she has to face it alone.

TVLINE | Part of that clearing of the decks addresses Noah, and it seems like maybe she’s not as into the idea of being swept off her feet as she originally thought. Is that an accurate reading of the moment?
No. For me, that is a moment of personal empowerment rather than a recognition that she’s not into him. I think it’s all in keeping in that moment where she’s on a roll and thinking out loud and it’s just coming to her, but the whole concept is really, like, “You know what? I don’t need you coming in on your white horse to rescue me. I don’t need anybody else. I’m here. I’m doing this. I’m in it, and I don’t need some billionaire to rescue me.” It wasn’t a denigration of her connection with Noah. I think that it was a denigration of this idea that “I’m someone who needs to be taken care of, I’m someone who can’t do it on my own.”

I was very pleased with the chemistry that [Kylie Bunbury and Tyler Hilton] had, and he’s delightful. That was one of the great surprises and fun elements of this episode, is how when we first started exploring the idea of reexamining, like, Rachel’s connection [with Mike] and going a little further with Ginny and Noah’s connection, off of the intensity of how the previous episode ended.

TVLINE | It’s refreshing to see Mike be the one who’s more spun by his almost-kiss with Ginny. Ginny seems so much more in control of knowing how she wants to handle the situation. How would you characterize their relationship, moving forward?
Listen, the tricky part of the undeniable connection between Ginny and Mike is that as Ginny says, as long as they’re teammates, it is somewhat untenable, certainly forbidden to a certain degree. But also, one of the great thing about it is that it’s out there now. Like, it’s undeniable. There is this connection, there is this chemistry, and so that informs everything going forward between the two of them. But there’s also this undeniable fact that it just is so inconvenient on all fronts.

… I was very pleased with the mislead, of feeling like he’s going to Ginny’s hotel room, and the anticipation of, “Oh my God, what’s that confrontation going to be like?” It’s a really tense moment. It’s really surprising that it’s actually Rachel’s room that he goes to, and I do think he’s very happy to see her at the game in the end. That, to me, leaves the possibilities for both Mike and Rachel and Ginny and Noah open-ended going forward; they both have connections with these other people.

But that said, the cat’s out of the bag, and [Mike and Ginny] both know that this incredibly strong bond that the two of them have, and attraction they have for each other is just always going to be there… Everything up until Episode 9, there was plausible deniability. Now there is not. So, it just makes for an interesting thing over the long haul. 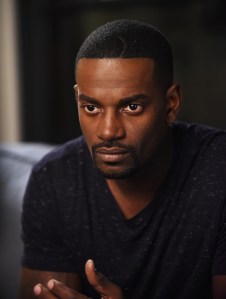 TVLINE | Can we talk about Blip and Evelyn? Because I love them, and they are not in a great place at the end of the episode, with him wanting more kids and her wanting to pursue a business.
We felt as though every marriage goes through different things, different bumps in the road. This felt like a very real possibility that you’ve got kids, and kids who are almost 8 years old, you’re sort of going to go one way or another as a couple.

…We’ve been hinting at this other side of Evelyn for a few episodes now, that she has this other side, has this whole plan and ambition when she was in school, and what she always sort of saw herself as, and she has this natural mind for business… We’ve explored issues from their marriage, mainly from the perspective of how much she had had to sacrifice, how much she’d done. but ultimately, they always come back to common ground.

This was a big one. Like, that concept of people being on opposite sides of whether they want to have more kids or not. It’s very rich territory and very relatable territory, very real within couples. And it wasn’t something that we wanted to touch on and wrap up in a single episode. It felt too big and too interesting. I just think it’s unrealistic to have couples always be perfect and happy.

TVLINE | When I spoke with Mark-Paul and Kylie a few weeks ago, both of them were like, “Oh, we’re definitely getting a Season 2.” What are your feelings on that? Have there been any discussions with the network?
There’s an enormous amount of love for the show internally, on a creative level, from both the studio and the network. They recognize how special it is, and we certainly got an indication from that, that they are inclined to do more. We certainly haven’t heard anything official, and nothing’s a given, but I certainly like our chances, and I think that what’s great is clearly the people who are connecting with the show are connecting passionately.

What did you think of the finale? Grade the episode via the poll below, then hit the comments to flesh out your thoughts!