One villain just isn’t enough on Legends of Tomorrow.

The Legion of Doom will add another member to its ranks during this Thursday’s fall finale (The CW, 8/7c) when the Waverider crew discovers that they’ve been set up by Damien Darhk, Eobard Thawne and Malcolm Merlyn in 1920s Chicago.

The trio causes “big trouble” for the heroes, star Brandon Routh previewed during TVLine’s visit to the show’s Vancouver set. “They’ve created so many aberrations that we’ve been after… It’s mystifying because we don’t know what their goal is. We can’t get ahead of them. We’re just constantly following after them [and] the breadcrumbs that they leave behind.”

Things go from bad to worse when “they capture a few of us,” Routh adds. But at least the team can rest easy knowing that their lives will be spared – for now. “We’re apparently a part of their plan, because they’re not just outright offing us either,” the actor notes. 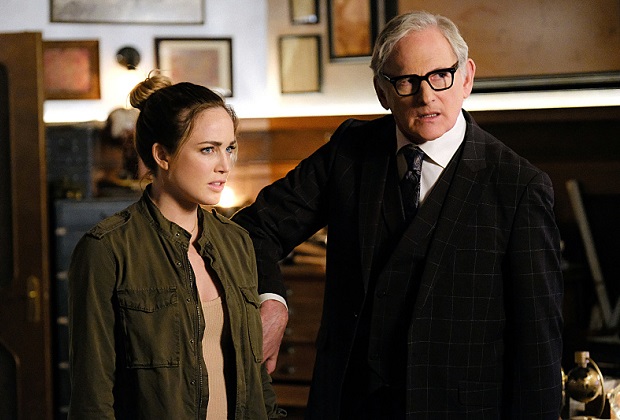 For Sara, finding out that her biggest enemies have partnered up is “like if the people that you hate the most started hanging out,” Caity Lotz describes. “They’re like the new mean girls. They’re The Plastics, and she’s just like, ‘Of course. Of course you guys would be in cahoots together.'”

“But it also makes it interesting for me, as an actor, to have such a passionate relationship or history with these bad guys,” Lotz continues. “I think with Savage, it was hard last year, ’cause Sara’s like, ‘Who’s this guy?’ And now it’s Malcolm Merlyn, who sank the ship [and] pretty much ruined her life the first time, then had her killed, and Damien Darhk, [who] killed her sister. There’s a lot of hatred that she’s going to have to deal with.”

The Legion’s presence is also personal for Amaya, who suspects that her friend Rex was murdered by one of the baddies. Naturally, when she comes face-to-face with the evil group, “it’s pure rage,” Maisie Richardson-Sellers shares. “It’s kind of emotional, because she’s finally meeting the killer that she’s been hunting for so long. But as always, nothing goes quite to plan. So there’s this whole battle that proceeds and carries on throughout the season.”

As for how Leonard Snart (aka Captain Cold) makes his return this Thursday — possibly as a member of the Legion! — after his untimely demise last season, that remains a mystery for now. But perhaps there’s a clue to be found in this tease about the team’s hypothetical reaction, courtesy of Routh: “I think if they saw him again, they might be very shocked. But at the same time, it’s time travel, so we could go back to an earlier time and find him still alive.”