Hey, don’t put this on Tara and Heath. Though Sunday’s episode of The Walking Dead drew the AMC drama’s lowest numbers (10.4 million viewers and a 4.9 demo rating) since “Hounded,” all the way back in Season 3, the supporting characters on whom the installment was centered aren’t to blame. At least not entirely. Our six theories as to why the series has taken a dip?

1 | Backlash from the Season 7 premiere
More than half of the viewers who voted in our October polls said that the show had gone too far with its violent depiction of Glenn and Abraham’s murders, and almost 40 percent of respondents swore that they were done with the show. Maybe it just took them a while to realize that, when they’d claimed to be through, they’d actually meant it. 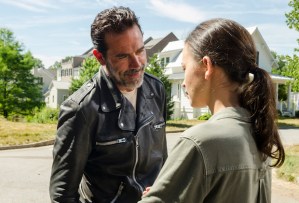 2 | Negan
Perhaps at the moment the audience just isn’t in the mood to watch a totalitarian ruler who thinks he’s hilarious tear apart a nice place like Alexandria while intimidating, demoralizing and/or humiliating every character who challenges him.

3 | Separation anxiety
Our core group of survivors is so scattered at this point that we’ve only seen them together in Episode 1’s bittersweet fantasy sequence. What’s more…

4 | People vanish for what feels like ages
We haven’t seen Carol in a month. Or Morgan. Or, after his eagerly anticipated introduction, King Ezekiel. (And you know there’s a problem when Enid is getting more airtime than Carol.) Meanwhile…

5 | We’re watching strangers
So many new characters have been introduced — and so quickly — that we aren’t getting to know them, much less care about them. And honestly, how many of us could even pick a Richard or a Benjamin out of a lineup?

6 | It’s depressing as hell
We know that we’re headed for an epic showdown. In the meantime, however, it’s a bummer-and-a-half to see Rick so broken and scared, and Daryl, reluctantly playing Negan’s lapdog.

What do you think? Have you stuck with the show? Have you been enjoying it as much as past seasons? What would you do to get it back on track?