Is Flashpoint the least of The Flash‘s woes? What’s the real question Once Upon a Time fans should be asking? Will Lucifer revisit his past? Did a S.H.I.E.L.D. agent tragically lose Hope? Read on for answers to those questions plus teases from other shows.

Will The Flash be dealing with Flashpoint repercussions for the entire season? —Mark
Actually, the Flashpoint backlash (backFlash?) Barry has been fielding will soon be eclipsed by more pressing issues. “The midseason finale (airing Dec. 6) kind of creates a new problem for our heroes that they weren’t anticipating, something that they’ve never faced before,” says showrunner Andrew Kreisberg. “It’s so big, we’re actually considering changing the saga sell from talking about Flashpoint to talking about that, because that’s really what’s driving the episodes for the rest of the season.”

Will we ever see flashbacks to when Lucifer first arrived in L.A.? —Adder
“That is a plan!” showrunner Ildy Modrovich declared when I hand-delivered your Q (as the Inside Line famously does). “We have four episodes at the very end [of Season 2] that are going to be completely standalone, and we plan to make one of them a flashback to Lucifer first arriving.” Speaking of the Devil….

Any Supernatural scoop? —Wendy
As seen in these photos, a banished and decaying Lucifer “does come back into play pretty significantly” in this Thursday’s episode, says Misha Collins, who is “excited to see how that big twist” with the fallen angel’s storyline plays out. Meanwhile, Dean and Sam will finally encounter Rick Springfield’s incarnation of Lucifer — but sadly, not for very long. “Most of [our] time was spent tracking him down,” Jensen Ackles explains. “So unfortunately, we didn’t really get the pleasure of working with [Rick] that much.” 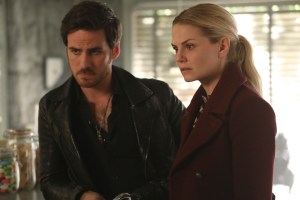 about the Once Upon a Time winter finale (airing this Sunday), because it looks like Emma and Hook won’t be together in the fairytale world. Got any good CaptainSwan scoop? —Alison
“Whether Emma and Hook are together in the winter finale isn’t the question to be asking,” responds co-creator Adam Horowitz. “The real question to ask is: Will the two of them be embarking on an epic adventure filled with romance, danger and passion in the second half of the season? And the answer is… yes.”

Will we see Emily Fornell at Christmas visiting my favorite NCIS “Odd Couple” (Gibbs/Fornell)? —Serena
As a matter of fact, yes, Juliette Angelo will reprise her role as Emily in “The Tie That Binds,” airing Dec. 13.

Any clues about the “Hope” photo that S.H.I.E.L.D.‘s Mack was staring at? —Trace
It sounds like after the winter break, we will get some insight into Mack’s past — including why it left him slow to pull the trigger on romance with Elena aka Yo-Yo. “The reason why he’s tentative [with Yo-Yo] will be explored and revealed later on,” Henry Simmons shared during a recent set visit, “and it’s a pretty big revelation, it really is. It’s a shock.”

Sarah Carter tweeted that she will be in Hawaii Five-0 Episode 7.16. Any scoop? —Belle
Well, this sounds fun: Lili Simmons will be back as Melissa in the same episode, as the ladies take their boyfriends on a joint “staycation.”

Any interesting news about Hawaii Five-0‘s Danny? —Lisa
Interesting, for sure: I am hearing that in an upcoming storyline, Detective Williams will — for whatever reasons — start to question his legacy….

When will the final episodes of Hell on Wheels be on Netflix? —Sue Ellen
I can confirm that those still awaiting HoW closure via Netflix can find any remaining episodes there on Dec. 31.

The CW’s #DCWeek got me wondering: With Chicago Justice coming up, is there any talk yet of NBC trying a 4-way crossover with the other shows? —Dee
There are no plans for a #OneChicago mega-crossover — yet — but Fire and P.D. will return in January with a two-night event involving “a big Severide story,” executive producer Derek Haas previews. In Tuesday’s fall finale, a burned-out Severide has “a little chat with Casey,” who suggests some bro time, Taylor Kinney describes. “He says, ‘Let’s get away, let’s go fishing,’ and something kind of happens [which] throws a wrench in that idea, but for a better purpose, I think. So we have some crossovers that have to do with my character, which lead into a crossover that we do on P.D. with Mouch and Severide.”

Is it too soon for a Suits spoiler? —Anna
I can assure you that Jessica’s departure — which will raise questions about who will now lead the firm, Harvey or Louis, how, and whether that person can handle all of the pressure — will not be an easy transition, at all, for the former.

Real questions, real answers! If you need the Inside Line on a favorite show, email InsideLine@tvline.com!  (With reporting by Vlada Gelman and Scott Huver)