Chances are, if you’re a Pitch fan who saw the Fox series’ most recent promo, one scene in particular hit you like a screwball to the chest: “Ginny and Mike coming close to a smooch,” series star Kylie Bunbury says, laughing.

And in advance of the final two episodes of the baseball drama’s rookie season, we figured we’d check in with Bunbury about how Ginny will deal with that near-kiss, as well as her shady brother’s increasing drama, the possibility that Mike will waive his no-trade clause and the addition of a potential love interest for Major League Baseball’s first female pitcher. Read on to see what she had to say.

TVLINE | Going into these last two episodes, Will is in Ginny’s orbit and is causing a little bit of trouble. Talk to me about him and Evelyn going into business together and what Ginny thinks about that.
Ginny and Will have a very strong connection, being brother and sister. But Will’s gotten into some bad business. And Ginny is made aware of it in the last episode, but it all comes to fruition in these last two episodes. You’re really gonna see the struggle for Ginny because I know, for myself with my brothers, I back them up 100 percent, no matter what. So in front of someone, just like that scene where Will didn’t really tell me about the bar and grill, but Ginny says, “Oh yeah, I know what you’re talking about” and then pulled him aside, she’s always taking care of her brother first, even if he’s messing up.

She finally reaches a point where she has to confront him and make a really difficult decision based on what his motives really are. It’s a really emotional scene, sort of this rollercoaster of emotions that they go through these last couple of episodes. It’s really relatable, because it’s family, and you just want to love them. But having to put a family member in place, it’s very difficult. 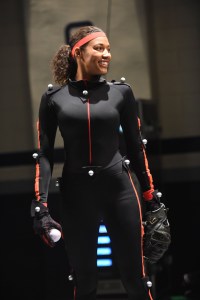 TVLINE | In photos from the final two eps, it looks like Ginny is getting motion-captured for a video game.
She’s definitely getting motion-captured. And that’s where she meets a fellow. So we’re getting to see Ginny sort of have a love interest. It’s exciting. It’s obviously gonna cause some conflict [Laughs]… His name is Noah [played by One Tree Hill‘s Tyler Hilton], and he’s a billionaire and the owner of this motion-capture company.

TVLINE | Since you brought up Mike and Ginny… what occurred to me during the last episode is that Mike is in a low place right now — career winding down, still in love with his ex, his Plan B not working out — and he’s probably just looking for a soft place to land.
Yes.

TVLINE | It almost read to me more like Ginny might be a comfort, rather than a romantic interest, for him right now. What can you tell me about their evolving closeness as we head into the finale?
I think you hit the nail on the head in terms of the comfort aspect. From the beginning of the show, Mike is calling Ginny late at night. He does find comfort in her. They understand each other. They have a really close connection. And their dynamic, it’s the dynamic of a pitcher and a catcher: They just happen to be opposite sexes. He needs someone like Ginny right now, because he’s not finding it in his ex-wife, because she’s engaged, and that’s messy.

I think that he really has a lot of love for Ginny, as a teammate, as a friend. It doesn’t really feel like he can talk to Blip about it, what he’s going through. Or any male. I think that he does need the comfort of a woman. That’s the other interesting thing about the show: She wants to be one of the guys, but we as women have that innate nuturing quality, and he sort of taps into that.

TVLINE | On the flip side, he’s also been a comfort for her on the team — and as we come into the end of the season, he’s considering waiving his no-trade clause. How does Ginny react when she hears about that?
She’s really sad. That’s really it. Here’s a person that she completely respects. They just found a really nice place. They’re in sync on the field and also in their personal lives together as friends. To hear that he could potentially be leaving is really traumatizing for her, because this is someone she really cares about deeply but also considers her go-to person for things.