Sunday’s episode of the sci-fi series found Jeffrey Wright‘s Bernard learning that he was an android clone of park co-founder Arnold, created by Dr. Robert Ford to (among other duties) help keep his fellow robotic “hosts” in line. And when Bernard threatened to have his creator killed, Ford thwarted him — and then instructed Bernard to kill himself via gunshot wound to the head, which he then did.

In advance of the HBO drama’s 90-minute season finale (Sunday, 9/8c), we spent a few minutes on the phone with Wright, going behind the scenes of the penultimate episode and trying to get him to take us to the metaphorical maze. And by that, we mean “trying to get him to confirm that Bernard isn’t really gone forever.”

We were about as successful as Elsie’s recon mission. But you’re gonna want to read on for the highlights, anyway.

TVLINE | I know you found out that Bernard was a host just after the pilot, but did you also know that he was a clone of Arnold this whole time?
Yes. I knew before last Sunday, yes. [Laughs] I was told the same time that Bernard had a dual existence, at the time that Lisa [Joy, executive producer] pulled me into her office and explained to me the complexity of the character. It was necessary, because I needed to understand that not only was he existing in two bodies but he’s also existing in two times, as well.

TVLINE | Talk to me about the subtle differences in the way you played Bernard and the way you played Arnold.
Well, I think the differences existed in the writing of the two characters. So in some ways, the audience has been shown the answers to these mysteries from the beginning of the show. And I guess part of that difference is the result of the only time we see Arnold is when he’s engaging with Dolores, and there’s a very specific drive behind those scenes. For all those reasons, there’s a very subtle increase in warmth with him, even though Bernard is a warm character and an empathetic character. But with Arnold, it’s even more organic in some ways. And for me that just kind of reflected off of the writing. His blood is a little bit thicker. There’s just a slightly more groundedness and casualness and fatherliness to him, particularly relative to Dolores. To me, it just came off the page. I didn’t realize it until I was doing it, that there was a slight space between the two of them in their regard.

TVLINE | In the final scenes of the episode, as we watched Ford walk away while Bernard shot himself, I immediately thought, “Hosts must’ve had similar injuries in the park and been repaired after. Bernard could come back!” When you first read the scene in the script, did you think that maybe this wasn’t the end for him?
At that point, the mind is kind of dysfunctional, you know? [Laughs] I don’t know what I was able to think. Ford is a clinical guy, it seems. Even with Bernard. That’s what it is.

TVLINE | When I talked to Jimmi Simpson, he said the finale “isn’t some b—s—t cliffhanger.” What was your reaction when you read the final script?
“Where’s Bernard?” When I got the script, that was my question. 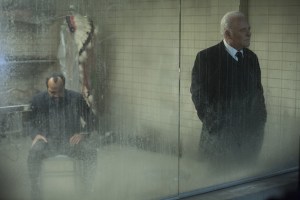 TVLINE | You’ve had a few very intense scenes opposite Anthony Hopkins in the last few episodes. Do either of you prefer to stay in character during breaks in shooting?
Are you kidding me? [Laughs] Yeah, no no no. The minute the camera shuts off, we start talking politics. No, man. We talk. That was half the joy of working with him is the time off camera.

TVLINE | You’re active on Twitter. Did you see anyone guess the Bernard-is-Arnold theory, and if so, how early in the season did that happen?
I don’t recall how early in the season, but there are some impressive theorists out there. I think we all are blown away and really gratified that people are so committed to notice the details of the show, because the opposite — that folks don’t give it a second thought — would be the worst backstory for all of us involved, you know? [Laughs] But at the same time, everything has been revealed since the first episode. It’s all been there on the table. Despite that, I don’t think there was anyone who completely read us cover to cover or perhaps wasn’t trusting that they were being told the truth from the start.