Warning: The following contains spoilers from Tuesday night’s The Flash

The Flash continued The CW’s #DCWeek crossover event in earnest on Tuesday night with mind-controlled heroes and some big changes for the West kids.

Let’s start with this alarming mystery: Are Barry and Iris no longer destined to get married? The guilt-ridden speedster shared with Oliver his concerns that all his timeline tinkering may have changed the course of his relationship with his longtime love. The two are (finally) a couple in the present, but that newspaper article from 2024 about The Flash’s disappearance, to be written by Iris West-Allen? The byline now carries a different reporter’s name.

That revelation is “going to have further complications,” executive producer Andrew Kreisberg teases. 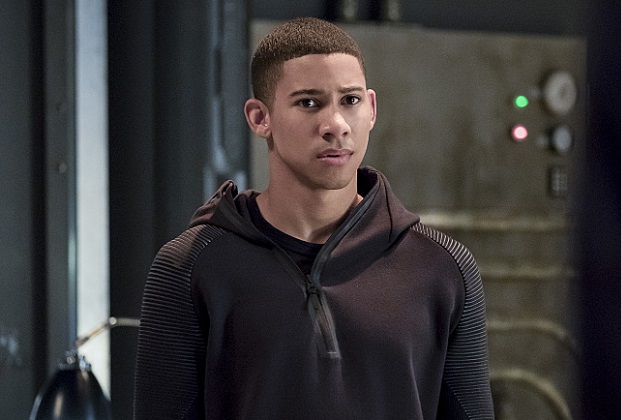 Elsewhere in the hour, Joe and Iris tried to keep Wally’s above-average speedster test results under wraps in an effort to keep him from running toward danger. But when Oliver and Barry found themselves under attack from their own friends, courtesy of the alien enemy’s mind-bending powers, Wally sped to the crimefighters’ aid. While Kid Flash got hurt during the rescue mission, his abilities caught the eye of H.R. Wells, who eventually agreed to train the lad.

As you can imagine, that partnership “will not go well,” Kreisberg previews with a laugh. But seemingly superfluous team member H.R. proves his worth in the process.

“He is a genius in his own way,” the EP explains. “He’s not a mathematical genius, and he’s not a physics genius the way the other Wellses were. He has the capacity to see other people’s talent and how to mine it and how to grow it. He sees that in Wally. Like he says in an upcoming episode, there’s nothing in it for him to help Wally, but he sees that Wally is special and that’s where he can shine, in helping other people discover their own value and develop their own gifts.”

As the two work together to hone the speedster’s skills, H.R. and Wally will develop “an interesting relationship” that parallels the show’s past mentor/mentee duos.

Flash fans, what did you think of the newspaper twist? And did you enjoy the episode’s super team-up?