When Chrissy Metz signed on to play Kate, a 30-something struggling with her weight on NBC’s This Is Us, it soon became clear that — one way or another — life was gonna imitate art.

Kate’s journey is “parallel to my life,” the actress tells TVLine. And to realistically portray a woman working toward a major goal, that meant that Metz would have to agree to lose weight as her character did.

The actress says she happily signed on the dotted line.

“In our contract, it did state that that would be a part of it, to lose the weight in the trajectory of the character as she comes to find herself,” she says. “That was a win-win for me. Because it’s one thing to try to do it on your own. But as human beings, it’s an ego thing: We’re more likely to do something for someone else.”

She adds that a job that came with the caveat that she gradually improve her health was that “different kind of motivation, so I was excited about it.” 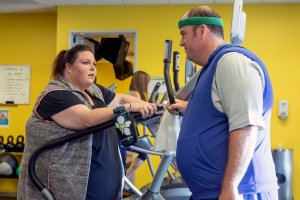 The NBC drama opened with Kate at a very low point: On her 36th birthday, she realized that her childhood visions of having a husband and family weren’t going to happen unless she made significant changes. “Look at me, Kev,” she lamented to her twin brother. “Like, I ate my dream life away.” She went on to join an Overeaters Anonymous-like group and meet a “fat friend” named Toby who became her boyfriend. As the season has progressed, we’ve watched her celebrate wins (intimacy with Toby) and experience setbacks (those gas-station donuts).

Behind the scenes, Metz says there have been “discussions” about Kate’s story eventually focusing on other facets of her life, “which is even more exciting. So I’m just rolling with the punches… I, as Chrissy, want to do things that mentally, emotionally and physically make me the best that I can be. That’s the intention for our writers and the development of the character.”

And before you can compose that angry tweet, hear this: Metz knows that you might view her eventual weight-loss as the byproduct of fame. After all, many stars — Jennifer Hudson (American Idol) and Ricki Lake (China Beach), for example — whittled themselves down significantly after landing major gigs.

“I just have to be very clear,” she says. “Whether or not I lose weight or stay the same, it’s purely a choice of mine for health. Not because I think that plus size, curvy, voluptuous, big bodies aren’t attractive — because I think they’re awesome and sexy.”

She continues: “So I’ll just have to make sure that’s known, because I’m not selling out the big girls.” She laughs. “I don’t do that. That’s not me.”