In the final moments of You’re the Worst‘s third season, every member of the gang seems to be at least a little better off than he or she was 13 episodes before. Lindsay is divorced but hopeful for the future. Edgar is single but employed in a great job.

And Jimmy offers an eloquent, loving proposal of marriage to Gretchen, who happily accepts.

Cue the music! Wipe away the happy tears! Pop the — oh wait, Jimmy’s driving away from the proposal, crying, stranding future wife (?) Gretchen in the Hollywood hills. Yep, this feels more like the You’re the Worst we know.

So what happened? After a day spent making their way to a recent murder site — y’know, for fun — Jimmy pulls out a diamong ring and proclaims that he and Gretchen together are unstoppable; alone, they’d eventually get sucked into the mundane lives they dread so much. She realizes that the crime scene is a fake — “You made a murder for me?!” she cries, delighted and touched — and excitedly says yes as he slides the ring on her finger.

Everything seems great… until she starts talking about how he lost his dad but gained her, and they’re going to be a family. “We’re no longer just us!” she says cheerily. Her words sink in as he leaves to go get a sweatshirt out of the car so they can have sex on the ground, and pretty soon he’s visibly upset and backing out of the parking lot… solo.

Elsewhere in the two-episode season finale: 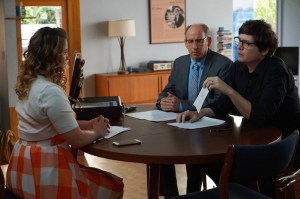 * Paul angrily confronts Lindsay about having an abortion without his knowledge. “You ruined our family!” he screams, but she remains calm. “You knew it was a snake when you picked it up,” she explains. “You don’t get to act surprised now.” And when she asks him to rip up their pre-nuptial agreement — which leaves her with nothing — he pulls her close and whispers, “You stabbed me, you cuckolded me, you ruined my life. Better lawyer up, bitch.”But she doesn’t. And when the soon-to-be-former couple sits down to negotiate a settlement, Lindsay too quickly agrees to $2000/month spousal support.

* Edgar gets a regular gig in the writers’ room at Doug Benson’s sketch show, but hides it from Dorothy so she won’t feel worse about her terrible career prospects. But when he realizes that taking the job and being upfront about it can only help them, she informs him that she’s giving up and moving back to Jacksonvill, Fla. Lindsay, now broke, moves into Dorothy’s terrible apartment.

* Jimmy realizes that his relationship with Gretchen has been fueling the writing of his book, which he finally finishes.

* Gretchen’s therapist, Justina, trolls her into showing up at a restaurant just so Justina’s friends can meet her. Justina also announces that she’s moving, but she commends Gretchen for the hard work she’s done and the growth she’s achieved through therapy. This makes Gretchen a little weepy.

* Becca has her daughter. They name her Tallulah.

Now it’s your turn. Do you think Jimmy and Gretchen’s wedding will actually happen? Weigh in via the poll below, then scroll down and grade the two-part finale!