In Wednesday’s Season 6 finale of American Horror Story, Roanoke served up a welcome blast from the past, allowing Sarah Paulson to exchange the late Audrey’s English accent for the 1970s-era Barbara Walters hairdo favored by Asylum survivor Lana Winters. But did the reporter manage to get the truth out of Lee during their heavily hyped TV interview? Did it help Lana that she was a dead (well, live) ringer for the reenactress that her subject had hacked with a meat cleaver? Did Lee even notice that Lana and Audrey could have been twins? Before you weigh in on the hour in the poll below, let’s answer these questions, shall we?

TRIALS AND ADULATION | As “Chapter 10” began, Sidney and the cast of My Roanoke Nightmare were being celebrated at a Paley Center panel before embarking on production on Season 2, reaction to which wound up being decidedly mixed. In particular, one superfan regretted that Lee had gone back for 3 Days in Hell, since now she would have to stand trial for her castmates’ on-camera murders. Meanwhile, Lot took to YouTube to express his intention to make things right his own way since the “Polk family ain’t never got justice in all our history.” (Maybe eating fewer people would have helped them in that regard… ) 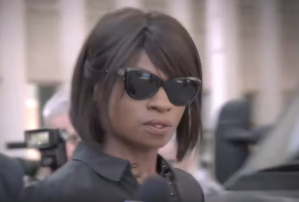 Further clips from a Crack’d installment about Lee revealed that, thanks to the torture that she had suffered at the Polks’ hands — not to mention the freaky pot they gave her — she was acquitted. Not willing to let her off the hook, the prosecution went after her for Mason’s homicide, going so far as to call Flora to the stand to testify that she’d seen her mother kill her father. Luckily for the accused, her lawyer was able to turn Flora’s mention of imaginary friend Priscilla into a “not guilty” verdict. Flora, however, still wanted nothing to do with her mom.

INTERVIEW TO A KILL | Later, introducing the live interview special that brought her out of retirement, Lana suggested that in fighting monsters, Lee became one herself. (Ya think?) The reporter started off with this probing question: How are you? (Oy.) From there, Lee explained that what kept her going was the hope of seeing Flora grow up — and seeing Flora, period, since Mason’s family had decided that she was a bad influence. For what it’s worth, Lee didn’t seem to notice Lana’s resemblance to Audrey. But she was well aware of the Briarcliff survivor’s past with Bloody Face — that was why she’d given her the interview.

Afforded the chance, Lee spoke directly to Flora via the camera, promising never to give up until they were together again. At that, Lana asked where the little girl was — her grandparents had reported her missing an hour before taping began! Just then, an assault weapon sounded — it was, naturally, Lot. “You are on live television,” Lana warned him. “The world is watching you, young man.” So, rather than kill them all, why not tell your truth? Instead, he hit Lana with his gun but was shot himself before he could take out Lee.

ONCE MORE, WITH SQUEALING | During a subsequent episode of Spirit Chasers — with Ashley (who played Cricket) in tow — the ghost hunters broke into the Roanoke house during the blood moon. As the sun set, things started, as they tended to there, to get freaky. First, it was just a sheet fluttering in a breezeless room and some noises. But then Ashley found a bonnet that he could just tell was the real McCoy, not a show prop — not bad for a mere actor — and Lee showed up looking for Flora. She’d seen Priscilla enter the house, and hey, since she’d taken her daughter before… 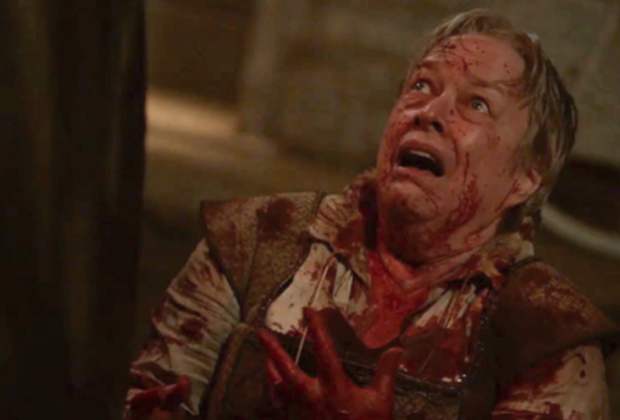 In no time, the variety pack of ghosts that inhabited the house took out Ashley, then one by one, the Spirit Chasers crew. Finally, as the police and news crews surrounded the house, Lee was reunited with Flora. The desperate mom pled her case, but Flora wasn’t about to cut her any slack for murdering Mason. Furthermore, the youngster wanted to stay there with Priscilla — she could protect her pal from The Butcher if she was like Priscilla. Lee suggested that they trade places — she would stay behind and protect Priscilla, while Flora went to live with her grandparents. “What do you think?” Flora asked Priscilla. Next thing we knew, the police smelled smoke, and the house went up in flames. Inside, Lee had had Priscilla shoot her. (Does this make Flora the final girl?)

So, what did you think of “Chapter 10”? Grade it in the poll below, then hit the comments to back up your assessment.