We hate to break it to you, This Is Us fans, but Tuesday’s episode (NBC, 9/8c) makes it clear that Toby has been spending time with another woman.

The revelation that Kate’s boyfriend and self-described “fat friend” has been deviating from their joint healthy journey stings, portrayer Chrissy Metz tells TVLine, especially because Kate’s own weight loss is proceeding proven slower than desired.

“Kate had an observation in the beginning because, finally, she’d made a decision to put herself first. And here comes this really amazing, wonderful man willing to do all these romantic and wonderful things for her,” Metz says. “But it doesn’t matter how much you love somebody, or how attracted you are to them: If you’re not ready to make honest changes… it doesn’t matter.”

Maybe it’s just our experience with the NBC drama that’s putting us on emotional high alert, but that sounds a little ominous, no? Read on as Metz talks up this week’s hour and gives us a glimpse of how the Pearson family Thanksgiving will play out. 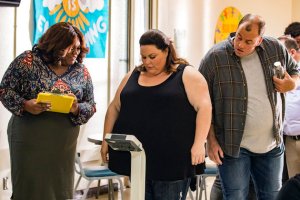 TVLINE | Tell me more about Kate and Toby this week.
Toby is imperfectly perfect, but going through his own stuff. We saw the backstory that he was married to a really beautiful, successful woman who took from him, and broke his heart, and didn’t care about him. We all have demons that we’re contending with, and those are definitely brought up. It kind of throws Kate for a loop, because she’s overweight. Like, “This is what you said you were going to do for me!”

And when somebody says they’re going to do something and they don’t follow through, whether it’s us as an individual, or a significant other, or family member, it’s heartbreaking. Because you’re like, “But I finally trusted you, and now this?” So, without giving too much away, they aren’t perfect — even if they look like that on paper, or because he brought her to an old folks’ home to be a star, you know? [Laughs] I mean, it’s a beautiful thing, but, you got to follow through!

TVLINE | The synopsis for the Thanksgiving episode, airing next week, says, “Kate makes two drastic life-changing decisions.” That sounds heavy. What can you tell me about that?
I think anytime anybody goes home for the holidays, whether they have a crazy huge family or they don’t have family, the holidays are always tricky. And Kate being away from Kevin, and this going on with Toby, she’s like, “Wait a minute, what’s going on?” For her, it was like, how do I get a tighter grip on what it is that I want to do? And how can I make this happen? What can I do right now, right now? And so, really, I think when you’re desperate, you make rash decisions. We all hope for the best, but you have to make those decisions — whether they’re the right ones or not. You make them because you’re desperate, and I think she’s very, very desperate.