Does Arrow have a “Ghul” twist coming up? Is there hope for Once Upon a Time‘s Rumbelle fans? Is Lucifer going to roll the dice on romance? Read on for answers to those questions plus teases from other shows.

Anything to report yet on Arrow‘s Talia al Ghul (to be played by Lexa Doig)? —Laura
Just this provocative morsel from series star Stephen Amell: “We learn about Talia before we meet her — and she is, I think, our gateway to really accelerating the flashback storyline.” See, now I would never have linked the two. Hmm….

Are Arrow‘s Diggle and Felicity going to have any one-on-one scenes coming up? — Chasity
“I hope so,” David Ramsey said during our set visit. “I hope you get to see [the OTA of Diggle, Felicity and Oliver] more, in general, because I think the show has really missed that.” Ramsey understands that Season 5 has “a big story to tell, and now you have more characters to tell the story,” but “I don’t think I’m misspeaking that the show really does hinge on those three and that relationship between them.”

Has Lucifer considered bringing Death of the Endless (from the comics) to the show? —Jenny
When it comes to introducing characters from the comics, “a lot of it is a timing thing,” writer Mike Costa shared during our recent set visit. “Because the comic is so obviously totally supernatural, we want to be very careful … that we don’t just start throwing everything at the wall.” Case in point: “When Uriel showed up, it was for a very specific reason, and it served a very strong dramatic purpose.” As for Costa’s own personal pick, “I don’t know how we would make [the fallen cherub] Gaudium work, but it would be great if we could figure that out.” Bonus scoop: Around midseason, don’t be surprised if Lucifer returns from a Vegas getaway with an ex-stripper on his arm and bearing his last name!

Pretty pretty please, something about Once Upon a Time? Particularly about Rumbelle? —Valeria
As relayed by yours truly in this week’s Facebook Live edition of “Ask Ausiello,” Once co-creator Adam Horowitz had this to say about the piece I did juxtaposing Disney’s Beauty and the Beast trailer with the sad, sad state of their Storybrooke iterations: “The audience doesn’t know where we’re headed with Belle and Rumple, but no matter how dark things get, the show doesn’t go bleak. It’s still about hope, and it’s always darkest before the dawn.” If you are now thinking, as I am, “Gee, ‘dawn’ then must be right around the corner,” I am hearing the next episode, airing Nov. 27, is in fact quite a game changer for Rumple and/or Belle. 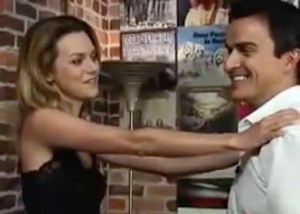 for the One Tree Hill faithful on Hilarie Burton’s Lethal Weapon role? —Chris
You’re funny, thinking that just because Hil and I once shared the World’s Most Awkward Slow Dance, I have her on speed di— “I envisioned her as a woman with older brothers,” Burton tells TVLine of her gig as a DEA agent (airing this Wednesday), “someone who is not intimidated by a pack of dudes, but who gets easily frustrated when they start teasing her.” Speaking of said dudes, “I can’t tell you how much I love Damon Wayans. He was incredibly kind to me and I may have geeked out over my ’90s memories of Major Payne and In Living Color. He’s an icon!” she gushes. “And Clayne [Crawford] was so fun to play off of. We were a couple of rowdy Southern kids chasing bad guys!”

Anything on any of the NCIS shows? Your pick. —Deena
Well, I’ve got this: YouTube fashion guru Blair Fowler (aka JuicyStar07) will guest on an upcoming episode as Poppy, a viral star whose meet-and-greet with fans takes such a nasty turn, no less than Sam has to intervene.

I need some Gilmore Girls revival news! —Eric
Because… we have been skimping? Well, prepare to be blown away by the ending, and I’m not simply referring to The FFW. As Lauren Graham told Michael Ausiello, the climax of “Fall” — the closing installment of the four-chapter Gilmore Girls: A Year in the Life (Netflixing Nov. 25) — revolves around “a magical sequence” that was something of a beast to execute. “We were up until 6 am shooting it,” she notes. “It’s a whole giant sequence and there’s a lot of cool stuff in it.” 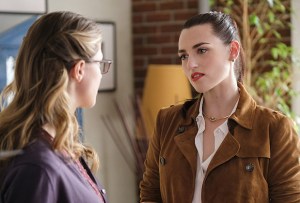 Luthor become a friend or a new threat to Kara/Supergirl? — Fandom Pilipinas
“I mean, should anyone ever trust a Luthor? That’s going to be the looming question,” Melissa Benoist answers. “Lena and Kara have such an awesome relationship — I love the scenes with Katie McGrath, she is awesome and perfect in that part — but I don’t think Kara is ever going to be able to truly know if Lena is being honest, or if she shouldn’t be suspicious of her.” That said, “There is a true friendship there,” she adds, “and a mutual respect.”

Y’all were the first to report that Scandal would have a shortened 16-episode sixth season. However, Shonda Rhimes recently said in her Facebook Live chat that it was 17 or 18 episodes. Can you find out what the official episode order is? —Bevo
An ABC rep confirms that the magic number is, in fact, a sweet 16.

On Chicago Fire, will Antonio and Gabby Dawson’s parents adore Lt. Matthew Casey and Sylvie Brett? —Christopher
“Casey’s been around for four or five years,” executive producer Michael Brandt notes. “We play that he’s got a good relationship with the parents. They, of course, think he’s great because he’s such a stand-up, great guy. But there are some other issues with her parents that are so big that what’s going on with Casey is almost unimportant.”

Any scoop on Chicago P.D.? —Jeannie
Before making the move to Justice, Antonio will seek the advice of his sister Gabby during this Wednesday’s fall finale. “I say, ‘Look, are you going to have better hours?'” previews Monica Raymund. “He goes, ‘Yeah,’ and I say to him, ‘Because this is an opportunity for you to spend more time with your kids.’ I remind him that being on P.D. has taken his time away from his family, so maybe going over to [the D.A.’s office] is a blessing.” 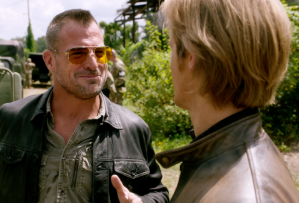 like to know more about MacGyver‘s Dalton (played by George Eads). Will there be a Jack-centric episode coming up? —Maria
Right after the new year, the CBS freshman will delve more into Jack’s love life, as we learn just what a stand-up guy he really is.

Any new Timeless adventures to tease? —Rebecca
A midseason episode will introduce the team to not just the murderous H.H. Holmes, but also a certain young escape artist of the time….

Real questions, real answers! If you need the Inside Line on a favorite show, email InsideLine@tvline.com!  (With reporting by Vlada Gelman)