Two very different tales as old as time are on display in the romantic trailer for Disney’s upcoming live-action Beauty and the Beast film and ABC’s Once Upon a Time, where Belle’s “beast” of a husband has just resorted to drastic measures in the name of “love.”

In Beauty and the Beast (hitting theaters March 17, 2017), an independent young woman named Belle (played by English actress Emma Watson) offers her servitude to a prince-turned-beast, in trade for her captured father’s safety.

On Once, an independent young bookworm named Belle (played by Australian actress Emilie de Ravin) offered her servitude to the beastly Rumplestiltskin, in trade for the sorcerer protecting her father’s town from warring ogres.

In the original tale (which was famously brought to vivid realization by the animated 1991 feature), the beast, despite his appearance, eventually earns Belle’s love and thus transforms back into a traditionally handsome prince. 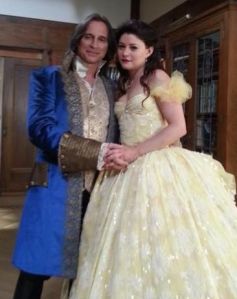 On Once, Rumple eventually earns Belle’s love… only to have things regularly get rocky once they are reunited in Storybrooke, Maine, after the Dark Curse. Rumple is forever torn between doing right by Belle, who ultimately becomes his wife and carries their child, and his role as the all-powerful Dark One.

So Machiavellian is Rumple that Belle is loathe to let him into their son’s life once born. And to that end, this week she sought to sneak back to the Enchanted Forest. When her escape went not-so-great, Rumple slapped onto his wife’s wrist a cuff/glittery manacle/magical GPS tracker, declaring that he will always be able to find her. “You really are a beast,” Belle in turn observed.

When she then told Rumple, “Next time, I will run so fast and so far that you will never even set eyes on this child,” he reminded her with a hiss, “Rumplestiltskin takes children. Not the other way around.”

Yikes. One might say they are back to “Barely even friends,” as the “Beauty and the Beast” title song goes.

Watch the Beauty and the Beast trailer (again, probably!) below, then tell us if you think Once’s Rumple and Belle have any chance in heck of recapturing that epic style of romance. Should they, even?

UPDATE: Get the latest on Rumbelle from Monday’s Facebook Live video chat.