This Tuesday on The Flash (The CW, 8/7c), Wally’s dream of being a speedster turns into… well, an actual dream, when his slumber is interrupted by visions of exactly that. Is this some sort of affirmation that he is fated to be super-fleet of feet? Or might this mark his first step toward an eeeevil reality?

Wally’s “visions of this alternate life” indeed excite more than confuse him, seeing as they appear to support his theory — held ever since he and Jesse Wells got pummeled by waves of the speed force — that he will join Barry on the extremely fast track. “He has already been having these feelings of him being a speedster, assuming that’s in his future,” says Wally’s portrayer,   Keiynan Lonsdale. “So when you put these visions and dreams on top of that, it’s an extra validation that he’s right. But it can be quite a challenge in his own head.”

Wally will quickly share his visceral visions with those close to him (“It’s difficult for him to keep that in,” Lonsdale says with a laugh), though doing do elicits fears more than cheers.

“Everyone’s conflicted,” Lonsdale reports — perhaps most of all Barry, who “has kept this a secret from Wally” ever since arriving from the Flashpoint timeline where Iris’ kid brother patrolled Central City as Kid Flash. After all, though being a speedster comes with certain perks, The Rival and Magenta have shown the heroes that making an appointment with Doctor Alchemy charges a high price.

“They know that Alchemy isn’t a good guy, so I don’t think anyone wants Wally near him” in the name of pursuing a metahuman destiny, Lonsdale previews. “People become dangerous after Alchemy gets his hands on them, so [the initial response is], ‘OK, we need to not let that happen.'”

Yet for the adrenaline-chasing, street racing enthusiast, “The idea of being a speedster doesn’t scare him at all,” says Lonsdale. Rather, “It’s perfect for him. Though these visions get pretty nasty at one point, and that definitely troubles him in a sense.” 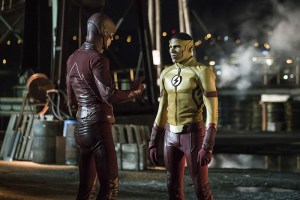 And how does the Aussie actor himself feel about perhaps suiting up on a full-time basis, if that proves to be Wally’s path? Detailing the pros and cons of his Kid Flash costume, he first raves, “It’s a speedster suit, so it makes you feel powerful. And it helps me for sure step into that role.”

That said…. “It can get really, really hot — especially when you’re [filming] indoors. And it can feel a little bit claustrophobic,” he shares. “But you just have to figure out with the [production] team, ‘OK, what kind of break do we have here? Do I have time to take even the cowl off?’ You just sort that out, because it’s a pretty amazing thing to be able to wear!”