Pitch‘s Mike Lawson has made his living catching whatever comes his way, but tonight’s episode knocks him down like a Nolan Ryan fastball.

The Padres captain already is worried about aging out of professional baseball. He’s recently been dumped by his hook-up buddy, Amelia. He’s in physical pain most of the time. And when the team calls up hot, young catcher Livan Duarte from the minor leagues, series star Mark-Paul Gosselaar tells TVLine, it gets a little ugly.

“Any alpha male will be familiar with having another alpha male come in. You start puffing your chest up a little bit, and you’re wondering where this is going to go,” Gosselaar says. “Mike can see the light at the end of the tunnel and wants to continue being the Mike that everyone expects him to be. Bringing on this new guy, Livan, brings uncertainty to him.”

The addition to the roster means that Lawson gets moved out from behind home plate, something that doesn’t sit well with Ginny’s bearded teammate. “He’s a catcher. That’s all he ever wants to be,” he adds. “It’s what he’s good at. To move him to a new position is just something that he doesn’t do well with.”

Read on as Gosselaar previews the hour — which features some Mike-centric flashbacks — and weighs in on Pitch‘s prospects at Fox. 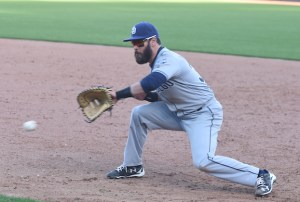 TVLINE | The show has made a point of showing how broken Mike’s body has become after a career in baseball. How much is his physicality on your mind when you’re acting?
It’s interesting. Mike Lawson is 36. When you’re 36, you’re almost a godfather. [Major League Baseball catcher] David Ross is 39, and they call him “Grandpa.” He’s 39. I’m very much aware, speaking with guys like [MLB catcher] AJ Pierzynski that you get to a certain point in your career and your body just can’t do it anymore. It hurts to wake up in the morning. We’ve already played that with Mike, a couple of times, with Amelia, where she jumps out of bed and he unfolds himself like a rusty folding chair, but that’s legit. I mean I beat up my body from the sports that I’ve done, nothing to the capacity of being a Major League ballplayer, but I definitely understand waking up in the morning and creaking, and that’s something that I think they portray really well on Pitch.

It doesn’t mean that Mike won’t be able to play, it just means that it hurts to play, and that will be an interesting journey to follow on: You have the mental capacity to play but your body, physically, can’t.

TVLINE | This episode is the one where those hacked photos of Ginny from her ex-boyfriend’s computer show up again. It makes me wonder: If Mike had done something in his earlier years that could come back to haunt him, what do you think it might’ve been?
Oh, I don’t know. I mean, we all know that Mike is a bit of a playboy and had a past, but also you see the previous episode where he has this love, still, for his ex-wife. Honestly, sometimes I can’t even figure out Mike… You see him now, you know, his exterior being this gruff bear of a guy, but I think that’s just him putting on his armor every day because he is soft on the inside… I don’t know if we’ll ever see, in flashbacks, what Mike was like before he met his ex-wife, or even during the time that he was with her. I mean there was obviously a reason why she left him.

TVLINE | Pitch ends its 10-episode run on Dec. 8. Do you think there’ll be more episodes?
Absolutely. I’m not even entertaining the thought that we won’t come back. Mo [McRae] and Kylie [Bunbury] and myself, we’ve all said that we’ll give our bodies about a month break before we go into our preseason routine and begin training again for next season.

Pitch airs tonight at 9/8c on Fox. Hit the comments with your thoughts: Would you like to see the baseball drama continue past Episode 10?