The term “complicated surgery” took on a whole new meaning in Thursday’s artful Debbie Allen-directed Grey’s Anatomy, as sleep deprivation, short tempers, hurt feelings and a whole lotta memories crowded into the O.R. along with Meredith, Richard, Owen and Stephanie. Did the patient manage to survive not only multiple procedures but his caregivers’ vivid recollections of, among others, Hunt’s long-discussed, presumed-dead sister? Read on and find out.

‘WHEN HE’S PISSED, HE REALLY LIKES TO TEACH’ | Early on in “The Room Where It Happens,” a well-rested Richard joined his exhausted colleagues in surgery after two motorists were rushed into Grey Sloan’s E.R. following a freeway collision. In no time, Webber became upset that the docs were behaving with the John Doe like “mechanics… treating [him] like a sack of organs on a table,” so he challenged them to play a game: Make the patient someone in their minds — anyone they wanted.

When Mer and Owen weren’t arguing over whether, with John Doe’s liver already shredded, his kidney could be saved — she said no; he, yes — Richard started the game by imagining that the man was actually a beautiful 46-year-old woman named Gail, a cellist with three kids. He didn’t get much further, however, before he was drawn into a fight with Mer over whether to call UNOS for an emergency liver. (Ultimately, she ended the debate by pointing out that, as Chief of General Surgery, “I outrank you.” Snap!) 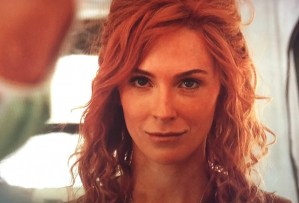 ‘WHY ARE YOU GUILTY, EEYORE?’ | When Owen was called upon to personalize the patient, he insisted that he didn’t have to, that he’d successfully operated on many a John Doe while enlisted. Bulls—, sis Megan (guest star Bridget Regan) declared in his head. He’d always made it a priority to get hold of their dog tags. Before long, as she razzed him about turning into their father and suturing as slowly as a tortoise, it became harder and harder to imagine how Nathan could have cheated on Megan. She was charming!

Later, Owen’s imagined sibling asked if he felt guilty since he’d begun to lighten up on Riggs. Or was the problem his new wife? He should have married Mer, “Megan” argued. Oh, and BTW, “you’re not gonna choke anybody again, are you?” (Man, Owen’s imagination is not a nice place to be!) At the end of all this, Hunt decided to side with Richard about the transplant, and, to Mer’s chagrin, removed John Doe’s liver. 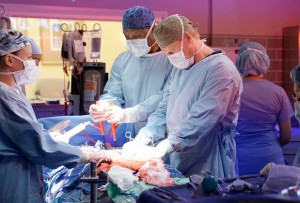 ‘IF YOU’VE GOT SOMETHING TO SAY, SPEAK UP!’ | Deducing that the patient was suffering from a not-as-uncommon-as-everyone-thinks autoimmune disease, Stephanie pictured her younger self quoting from the medical books she’d read while hospitalized for sickle-cell-anemia treatment, and piped up with a suggestion to save the guy’s life. Was it risky? Hell, yeah. But “if I were on the table,” she said, “I’d want the risky thing.”

After the foursome learned that the patient was Carl Henley, a married father of two, he lay dying on the table, sending Mer flashing back to Derek’s demise. Before anyone in the present could do as she ordered and inform the family that they were about to lose Carl, they got his heartbeat back. At that point, Grey realized, “It’s time to compromise, for all of us,” and recalled the awful moment when she had to tell little Bailey and Zola that she couldn’t fix their daddy, “because he’s dead.”

‘IT’S A HAIL MARY’ | Off that heartbreaking scene, Mer realized that Richard hadn’t made up Gail, prompting him to admit that yes, she was his mother. And he’d always hated the constant drone of her cello playing… until, that is, it stopped. As he challenged Stephanie to diagnose Gail based on her symptoms — she’d died of pancreatic cancer, it turned out — Mer got the bright idea to repair part of Carl’s liver and use it for his transplant.

Miraculously, as the episode drew to a close, the daring procedure seemed to have worked. Before washing up and heading home, Mer apologized to Richard for barking at him… then, for a brief, wonderful, awful, wound-reopening instant, she imagined that she was looking right at Derek, alive and well and smiling his million-dollar smile. “Hi,” he said. And, that fast, a nurse interrupted, snapping Grey out of her reverie. Sigh.

What did you think of the episode? Did you like the sneaky way Megan was introduced? Didn’t Owen’s line about not stopping till you know someone’s dead suggest he was about to search for her anew?