One of the Gilmore Girls revival’s least guarded casting secrets is out: In the second installment, “Spring,” of the four-chapter series (released Nov. 25), I eschew the cozy comforts of the Dragonfly Inn (the site of my Season 5 cameo) for the concrete jungle of Manhattan as Guy Eating Salad in Stairwell No. 2.

And without divulging too many details of my storyline, I can safely reveal that my spiffy new alter ego has an unexpected run-in with Lorelai (Lauren Graham) and Rory (Alexis Bledel). And yes, sparks flew. Graham says so herself!

“If we’re talking about romance, Lorelai’s head is turned by Guy Eating Salad in Stairwell,” Graham deadpans in the following video, prompting Bledel to chime in, “And Rory noticed that this went on.” (FYI: The image above of the three of us was shot after the camera were done rolling — hence the look of relief in my eyes).

Press PLAY below to watch me expertly (or shamelessly?) coax intel about my guest appearance out of Graham and Bledel, then scroll down further for an exclusive first look at my scene (my dapper lunch mate, BTW, is up-and-coming actor Noah James). And reminder: All four episodes drop on Black Friday, aka Nov. 25. 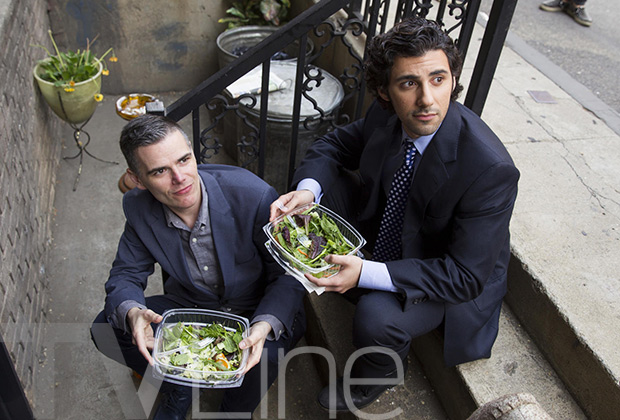