Tonight on Lucifer (Fox, 9/8c), two difficult truths are processed, while a most unlikely bromance begins to build. Here’s what the cast shared during TVLine’s recent visit to the sophomore drama’s set in Vancouver.

FATHER DAZE | At the fore of this week’s episode is Chloe’s discovery that the man who years ago was sentenced to prison for killing her LAPD cop father, John Decker (played in flashbacks by Chris Payne Gilbert), was merely a fall guy, and not the actual perpetrator. Understandably, the revelation — and ensuing, rebooted investigation — shakes Detective Decker to her core. “Growing up, I was close with my father, and then he was killed. But there was never a legitimate justice for him. Everything was wonky and nothing quite added up,” Lauren German says in character. “So when this case comes along…. I’m on a mission, and it’s fighting for someone you love. It’s the first time I’ve had a case I’m so invested in.”

As such, expect to see Chloe in laser-focused detective mode like never before, leaving little room for light banter with her cheeky partner in crimesolving. “The usual hijinks [with Lucifer] are gone,” says German. “I had the chance to play entirely new levels of emotional levels and grief…. It’s almost an episode on a different show, in a way.”

That said, the intense, extremely personal nature of Chloe’s latest case will serve to steer her bond with Lucifer in a fresh direction. “It kind of adds a new layer to getting to know each other, him seeing what has hurt Chloe in the past,” German shares. “We both got to see each other in a new light” — culminating in a closing moment fans won’t want to miss.

A TALE OF TWO DANS | Lucifer’s 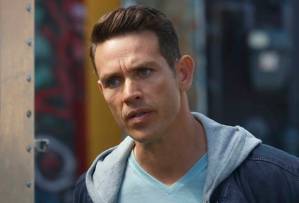 devil-may-care antics have no place in Chloe’s immediate orbit this week, so he instead helps Dan (Kevin Alejandro) follow up on some leads. Along the way, he chooses to mimic “Detective Douche” (watch LOL video) as a means of sampling the “normal” life that seems to appeal to a certain female human. Says Alejandro, “Lucifer is befuddled as to why Chloe is interested in a person like him, so he wants to go to great lengths to figure it all out — to the point of dressing, walking, talking, craning his neck a bit like Dan.”

Eventually, as part of an amusing reveal, Dan gets to flip the script and offer up his best Lucifer impression. Says Tom Ellis, “I remember Kevin coming to my trailer going, ‘So apparently I’ve got to be you in the next episode,’ so I did my lines on his iPhone…. But the nice thing for me is that a lot of it was happening during the scenes, so it wasn’t really about prepping. It was about being observant and trying to not be glib about it.”

Might spending some time in each other’s shoes pave the way for a reluctant bromance? Mayyyybe. Per Ellis, “It becomes a thing for Lucifer where he’s on his best behavior, almost, until Dan gives him good reason to call him douche again. Which he does, by the way!”

ABOUT (THAT) FACE | Last but 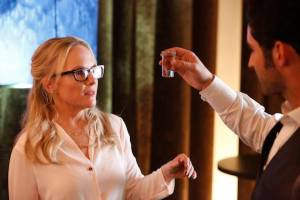 far from least, this week’s episode checks in on Dr. Linda (Rachael Harris), who at her own urging laid witness to Lucifer’s true, actual face. “There were several different ways they could have gone with that,” says Harris, “and finally they were very excited in the writers’ room when they decided it was going to be just that sweet reveal.” As for Linda’s immediate reaction, there literally were no words to describe it. “I think it did render her speechless, which was really appropriate,” says her portrayer. “And then the look on his face was just devastated. Tom broke my heart in that moment.”

In the wake of that reveal, “not only has [Linda’s] world been turned upside down, she’s been completely smashed apart,” says Harris. “She’s really having to process what it means to know that this mythology or whatever that she’s questioned actually exists. She’s struggling. And quite fearful.”

That fear of who or what has been circling her all this time causes a bump in her new friendship with Maze. “There are some big repercussions for what Lucifer did,” says Lesley-Ann Brandt. “And for [Maze], she feels like it was a very selfish reveal, because it changes the dynamics of our interactions — especially if Maze is in turn found out. “Sure, maybe you can see me take down a 300-lb. guy and go, ‘How the hell did she do that?’ But that’s way more believable than, ‘Oh, you’re the devil and you’re a demon and you’re an angel and you’re the mother of all creation,” says Brandt. “Maze once again feels like, Lucifer, ‘you did something and you did not think of anyone else.’ But those scenes are my favorite that I’ve filmed this season so far, because it’s real and raw and it sort of cuts to a part of this character that you don’t get to see very often — which is her vulnerability.” (Reporting by Vlada Gelman)