Saving lives almost took a backseat to saving livelihoods in Thursday’s Grey’s Anatomy. As soon as Catherine brought in a consultant to evaluate Grey Sloan’s residency program, doctors from Richard on down were forced to wonder whether the next thing they were handed in the hospital was gonna be a scalpel or a pink slip. Did anyone actually get axed, though? Read on and find out. 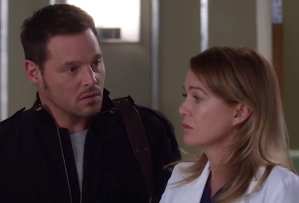 ‘HEADS ROLLED’ | As “Why Try to Change Me Now” began, word was just beginning to spread around Grey Sloan that an evaluation of the staff’s methods was about to be made by Dr. Eliza Minnick (Marika Dominczyk). When Alex groaned that this was happening because of him, Meredith insisted, “Everything isn’t about you. That doesn’t even make sense.” Then, of course, he reminded her that he — a teacher — had beat up DeLuca — a student. “Oh,” she had to admit. “That makes sense.” At the same time, Leah was panicking her fellow residents, pointing out that, naturally, Bailey’s email hadn’t sounded scary — the chief wasn’t about to “BCC a mass firing announcement to the entire staff.” However, scary was exactly what Minnick was. She’s “kind of a legend,” Murphy said. Stephanie, for her part, suspected that Ben was the reason Minnick was being called in.

‘IF I’M YOUR STUDENT, GOD HELP ME, RIGHT?’ | While Richard was learning from Bailey that he wouldn’t be introducing Minnick around since she was already at work, she was talking to the residents, asking them “who you love, who you hate” and reassuring them that, “This room is a vault. Nothing leaves these walls.” (Speaking of walls, watching from outside, a forlorn Webber appeared to read some writing on one.) Later, Richard grilled Andrew about the residents’ meeting with Minnick but only found out that it had been “interesting.” After Eliza stepped on Meredith’s toes in the ER, she went to Webber and told him, as director of the residency program, to kindly “direct her — to the door!” Maggie, meanwhile, was perturbed after swiping Minnick’s notes to see that the residents had ranked her last among the attendings!

‘IT’S MY DECISION TO MAKE’ | Having observed Minnick in action, Richard asked Bailey to intervene. When Miranda refused, he said fine, he’d inform the consultant himself that she was to “observe and nothing more.” Only then did Bailey reveal that “that’s not the deal,” that, in fact, Minnick had been tasked with making a decision about the way the program was running. “Are you giving her my job?” Webber asked. No, Bailey insisted. She wanted Minnick to work with him. “Medicine is changing constantly,” she said. “Change along with it, or get left behind.” Yikes. In the end, when Bailey pointed out that the decision was hers to make as chief, Richard reminded her that he’d fought to get her that job.

‘MY BRAIN IS MELTING’ | That evening, Bailey admitted to Ben that she needed reassurance that she was doing the right thing (which he sweetly gave her). The following day, Maggie urged Leah to tell her if there was anything she could do to help her learning, and Murphy admitted that her mentor could slow down. Shortly, Pierce’s determination to win over Minnick led to her letting Leah take the lead during a risky surgery. Eventually, it got to the point where Murphy didn’t “feel ready to do this,” so she tagged out, DeLuca tagged in and dealt with a nicked artery. Ultimately, no harm was done, but Webber still hit the roof, prompting Minnick to defend her methods as infinitely more effective in the instruction of the residents.

‘I SWIPED LEFT’ | Over the course of the day, Arizona, Maggie and Nathan learned that April was on Tinder (and being pinged right and left!). She even said yes to one guy, awkwardly right as she bumped into Jackson. That evening, she and her ex navigated the weirdness of her going on a date, and pretty well, especially for them. The next day, she reported that her date was “pretty amazing” — so much so that they were gonna go out again that night. Later, he asked if maybe they could not talk about their dating lives, and she admitted that actually, her date had sucked. That night, he managed to encourage her to keep dipping her toe in the dating pool.

‘THIS IS STILL HAPPENING?’ | Amelia’s reluctance to confide in Owen resulted in their working relationship — imagine that! — becoming remarkably tense… in front of Minnick, no less. She even began sleeping at Grey Sloan, which is never a good sign. After hearing that the wife of a patient wanted to stay overnight at the hospital because, in 20 years of marriage, she and her husband had never slept apart, Amelia tried to kiss and make up with her husband. Alas, by then, he was too pissed to do so, and at last, she blurted out, “I don’t wanna have a baby.” When she showed up at Meredith’s, Alex tried to throw her out to take care of the sword hanging over her head but softened when she informed him that the sword had fallen.

‘SHE’S AN ASS, BUT SHE’S RIGHT’ | As the episode drew to a close, Maggie admitted that, as smart as she was, Minnick wasn’t wrong about her. On the flip side, Arizona pled her case to Eliza as “a rare exotic bird” and found out that the pilfered list hadn’t been a ranking of any sort, it was just a list of names. (She also found out that Minnick had noticed her lovely face.) Right before Richard expressed to Bailey his new willingness to work with Minnick, Eliza told the chief that she was seriously considering coming to Grey Sloan. If she did join the staff, however, “I don’t share authority,” she made it clear. “I am the authority.”

So, what did you think of “Why Try to Change Me Now”? Do you hope Minnick will stick around? Do you like her as a potential love interest for Arizona? Hit the comments.