Donald Glover’s Earn has his biggest win of Atlanta‘s first season in its final episode, yet he still ends the installment sleeping alone in a storage unit.

If there’s a more fitting way for the FX comedy to end its excellent freshman outing, I can’t think of it.

Most of the finale, titled “The Jacket,” involves Earn searching the city for a blue bomber jacket he was wearing during the previous (debauched) evening, during which he, Alfred and Darius Ubered to a strip club and wound up at a house party that got a little out of control. Earn wakes up at the site of the festivities late the next morning, alone, and starts to panic when he can’t find his outerwear.

As he reconstructs the events of the previous night, thanks to Alfred’s copious Snapchat snaps, Earn retraces his steps to the gentlemen’s club (no luck) and then finds his cousin and Darius hanging out on the couch in the field. They call the Uber driver, who has the garment but wants $50 to drop it off. Al does Earn a solid by driving him there, instead. And Darius, of course, comes along.

Two important things happen while they’re waiting in the car outside the driver’s house. First, rapper Senator K calls Earn and wants Paper Boi to go on tour with him. Second, Alfred suddenly gets the feeling that something’s not right. So he hastily starts the engine and begins to pull away, but police cars screech up out of nowhere and block the guys’ exit. While Earn, Alfred and Darius are being questioned and put up against the car, the Uber driver makes a run for it… and the cops shoot him really, really dead. When he recovers slightly from watching a guy gunned down in front of him, Earn asks the police to check the man’s pockets: Yep, he was wearing Earn’s jacket when he went down.

The pockets are empty — by the way, at this point we still don’t know exactly what Earn’s looking for — but back at the house, Alfred tosses him a roll of hundred-dollar bills: Earn’s five percent, as manager, of Paper Boi’s earnings. “You did good, man,” Al says, and it’s perhaps the first real moment all season where Earn’s work on his cousin’s behalf has paid off. 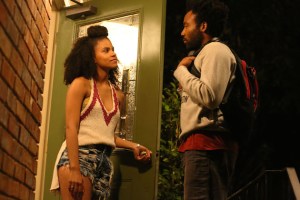 Back at Vanessa’s house, after making dinner for her and Lottie, Justin shows up with with Earn’s been searching for: a key with a tag labeled 425. (Earn gave it to him while drunk for safekeeping… then forgot.) Relieved, Earn has a cozy night on the couch with Van, during which he hands her most of the cash Alfred gave him. She lovingly says he’s a good dad.

But at the end of the night, even though she invites him to stay, Earn leaves her place. We watch him walk to the aforementioned storage facility, where the 425 key unlocks the unit where he’s apparently been living. He lies on the bed, rubbing the last two hundreds from the roll together. Dare we hope that this means things will be a bit brighter for him in Season 2?

Your turn. Grade the finale and the season on the whole via the poll below, then hit the comments to back up your choices!