“Where there’s life, there’s hope,” King Ezekiel told Carol — and, by extension, all of us — in Sunday’s episode of The Walking Dead. And, after that brutal Season 7 premiere, it was certainly a message that we needed to hear, even if it was still damn hard to believe. Luckily, we had to absorb it the whole rest of the light, funny hour — in which we learned not only how The Kingdom’s leader became its leader but also how he wound up with a pet tiger. So, what’s their story? Read on… 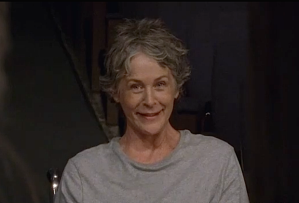 ‘WELCOME TO THE KINGDOM’ | As “The Well” began, Morgan and a delirious Carol were escorted by their Season 6 finale rescuers down a treacherous, walker-infested path to The Kingdom. There, Carol enjoyed a restorative two-day nap before Morgan — in the understatement of the year — explained to her that Ezekiel “does his own thing,” and wheeled her into a theatre for an audience with His Majesty. Oh, and another thing: “I forgot to say that Ezekiel has a tiger,” Shiva.

Odd as His Highness seemed to Carol, he was nothing if not a gracious host. He didn’t even bristle when she mistakenly called his four-legged friend Sheba or turned down his offer of a pomegranate. “I don’t know what the hell’s going on,” Carol exclaimed, “in the most wonderful way.” (How great was it to see her — anyone! — smile?) Since any friend of Morgan’s was to Ezekiel “a friend of the realm,” Carol was welcome to anything she wanted. But all she needed was more rest, she said. “And maybe a hairbrush. No one told me I’d be meeting royalty.” Once alone again with Morgan, Carol could no longer contain her disbelief: “You’re s—ting me, right? This place is a damn circus!” As such, she still intended to split the second her companion wasn’t looking. 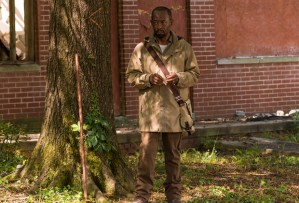 ‘FULL, FESTIVE AND FREE’ | Later, Morgan accompanied Ezekiel and some of his subjects — including right-hand man Richard and a lad named Ben — as they rounded up pigs in the city and fed them walkers. Wait… why was that? “I want their bellies full of rot,” Richard told Morgan. “That’s why.” As the swine were trucked “somewhere else” for slaughter, Ezekiel, having noticed Morgan’s proficiency with a staff — and Ben’s ineptitude with everything — asked the newcomer to The Kingdom to train the youngster. “I need him to live,” His Majesty said, for the boy was meant to become an important member of the king’s court. While Morgan began teaching Ben aikido, Carol was busy swiping a knife, some clothes and a chocolate bar (her weakness) in preparation for her getaway.

By and by, it became clear why the pigs had been taken away for slaughter — and why they’d been fed walkers. Ezekiel was keeping it a secret from his subjects that he’d purchased protection for them from — who else — the Saviors. And if you were serving a meal to Negan, wouldn’t you want it to poison him, or at least have a walker-y aftertaste? Delivering the goods to the baddies, Richard got into it with one of the Saviors, prompting them to remind Ezekiel that The Kingdom had better produce during Produce Week. “Otherwise, you know, [Richard’s] gonna have to go first.” Off this unpleasant exchange, Ezekiel deduced that the man Morgan had killed to save Carol had been a Savior. 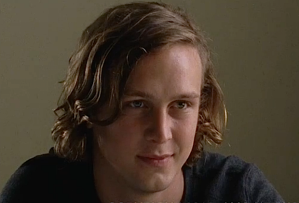 ‘YOU’RE SELLING THESE PEOPLE A FAIRY TALE’ | That evening in The Kingdom, Morgan learned that Ben’s father had died in the line of duty for Ezekiel, and that ever since, His Majesty had been helping him raise little Dutch. Ben also explained that the reason the king didn’t want people to know about his deal with the Saviors was that his subjects would want to fight back… but, Ezekiel believed, if they did, it wouldn’t be pretty. (Gee, ya think?)

Meanwhile, Carol was caught by His Highness stealing fruit on her way out of The Kingdom. Though she pretended that she could be of no use to him or his subjects, he saw right through her. “Never bulls— a bulls—ter,” he said. So, at last, they spoke candidly. Carol shot from the hip, calling The Kingdom and its monarch a joke. In response, Ezekiel dropped his facade and admitted that, since these people needed a leader, the sometime community theatre performer had “acted the part.” In other words, “I faked it till I made it.” And he hadn’t, as legend had it, become Shiva’s master by wrestling her. As a zookeeper, he’d once risked his life to save hers, and ever since, she’d been as loyal as a labrador. When the apocalypse hit, he rescued her from the zoo, and they’d been inseparable ever since.

‘WHERE THERE’S LIFE, THERE’S HOPE’ | Having been so frank with Carol, Ezekiel hoped she wouldn’t mind keeping the truth about him a secret for the sake of his subjects. “And a little bit for me,” he added wryly. In spite of their new understanding, Carol still wanted to make tracks. But where would she go? “Away,” she said. Ezekiel theorized that the bad that’s out there would only seem worse when she was alone. Besides, “its not all bad,” he noted. “It can’t be.” Finally, he suggested that she go… and not go. “Why do you care?” she asked. “’Cause it makes me feel good,” he answered.

Turned out, going and not going meant setting up Carol in a little house just outside of The Kingdom. Saying goodbye to Morgan, she admitted that she’d begun regretting all the times she tried to stab him. In turn, he called her “my favorite person that I ever knocked out… Definitely Top 2 or 3.” No sooner had Carol dispatched the undead former occupant of her new digs and built a fire than there was a knock at the door: Ezekiel, taking Shiva for a walk and bringing his neighbor a pomegranate. “You really gotta try one of these,” he insisted. And it sure looked like the beginning of a beautiful friendship.

So, what did you think of “The Well”? First impression of King Ezekiel? Hit the comments.