“You know each other?”

This week’s Law & Order: SVU doubled as a reunion between star Mariska Hargitay and Anthony Edwards, who go all the way back to ER‘s County General.

A brief refresher, STAT! Hargitay played Cynthia Hooper in the NBC medical drama’s fourth season. Hapless, people-pleasing Cynthia was the emergency department’s front desk clerk who eventually dated Edwards’ Mark Greene; she loved him, he thought it was a casual fling. (If you don’t remember and/or didn’t watch: Their relationship didn’t end well.)

SVU‘s “Rape Interrupted” episode involves a young, drunk woman and a young, drunk man, and whether or not the sex they had by some garbage bags was consensual. When the man’s father comes looking for his son, Olivia realizes that it’s Patrick (Edwards), her first partner. 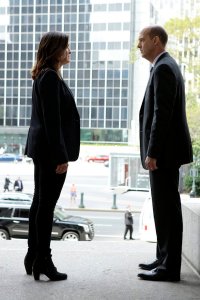 “He looked out for me. He taught me a lot,” Benson tells Fin as they investigate each sides’ claims. But when the woman, Janie, doesn’t waver in her assertion that she was in no shape to consent, Patrick’s son, Ellis, is poised to be arrested for rape.

Patrick argues that his son is no rapist, but that he made a “rookie mistake” in having sex with a drunk person. He argues that if he hadn’t testified on her behalf (and lied to save her butt) when she was accused of taking money and drugs during her first bust, she would’ve been in big trouble. She counters that “This is not the same as you and me. This is different. Your son raped an unconscious girl. This isn’t going away, Patrick.”

When Janie says she doesn’t want to testify, Barba offers Ellis a plea deal: Rape III, probation and community service, a spot on the national sex offender registry. And Ellis almost accepts it… until it comes time to read his apology in court, and he just can’t do it. So to trial we go — and Patrick approves, because he doesn’t think his son is guilty.

Benson shows up at Patrick’s house later that day when she’s sure that he did some shady deal to produce a witness who “saw everything” and can exonerate Ellis. “You drove a long way for nothing,” an irate Patrick tells her. (Boy, this is not Liv’s week — in addition to all of the case drama, she tells Fin that her relationship with Tucker is “complicated.”)

As Barba’s trying to out the miracle witness — a former criminal informant — as having been coerced into giving testimony, Ellis cracks. He stands up and says that the witness is lying; Ellis knew Janie was passed out, but he “couldn’t stop” and admits that he raped her.

At sentencing, Ellis gets 24 months in prison. And when Olivia finds Patrick on the steps of the courthouse, he admits to tampering with the witness and laments his son’s fate. He once more brings up the fact that she didn’t lie for him the way he did for her, all those years ago.