Warning: The following contains massive spoilers for the Season 7 premiere of The Walking Dead.

Having directed the polarizing Season 7 premiere of The Walking Dead, Greg Nicotero is keenly aware that many viewers wouldn’t mind if his head made a date with Lucille. But during a conference call with reporters Monday, he pointed out that “if we killed someone and [the audience was] just like, ‘OK, well, no big deal, I’m gonna go have a bagel,’ then that means that we haven’t done something to connect our people to the characters.” In other words, as upset as you may be, he done good. Read on to find out how the EP justified the brutality of the episode, why there had to be two deaths, not only one, and what he had to say to those who swear they’ll never watch again.

THE HOUR’S VIOLENCE | Nicotero acknowledged that hour was “intense.” However, he hastened to add that, when he first read the issue of Robert Kirkman’s comic-book series in which Glenn was “struck out” by Negan, he thought “it was horrifically graphic and… wanted to try to capture” that. More than wanted to, even, he had to. “It was important to launch us into this season by showing the extent of what Negan is capable of doing, because that drives so much of where the series is going from here on in.” Besides, to him, seeing Rick, “our hero, completely crushed… is more disturbing than the actual violence.” 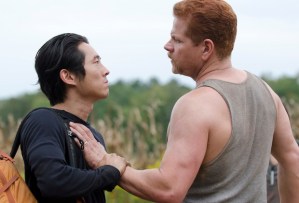 WHY ABRAHAM AND GLENN BOTH HAD TO DIE | Wouldn’t one casualty have sufficed? Yes… and no, said Nicotero. “We really needed to drive Rick and Negan’s story throughout the season, and we felt that one death would do the trick, but the second death — Glenn’s death — really propels us into a very different direction. [That second murder is] really about Negan laying down the law. So [it] has a lot to do with Rick’s future story, Maggie’s future story and certainly Daryl’s future story. Daryl was the one who launched himself at Negan,” after all, prompting him to turn around and kill Glenn.

WHY KEEP THE VICTIMS A SECRET TILL MIDSHOW | Nicotero insisted that, whether not revealing who died at the start of the hour seemed manipulative, “it certainly wasn’t intended that way. The episode is 100 percent designed for you to go on this journey with Rick and start thinking about what happened. It takes us about 10 or 12 minutes into the episode to get to the point where Rick is starting to feel defeated. He’s on top of the RV, and everything is flashing back to him. When he started reliving it, it’s the start of him being broken. Everything that he does [from that moment on] is based on the fact that someone else could die, and he can’t let that happen.”

SHOOTING THE DEATHS | “For me, the most significant thing was the bat that I’d designed that had a reservoir of blood [so] we were able to get the hits to look explosive as opposed to just blood dribbling,” said Nicotero. “With Steven [Yeun], we built multiple versions of that prosthetic with the eyeball popped out, and then, when he’s on the ground and the head is crushed, we actually dug a hole and put Steven’s face down into the ground and covered the back of his head with this sort of turtleneck crushed head so that you could see his real hand twitching and moving.” 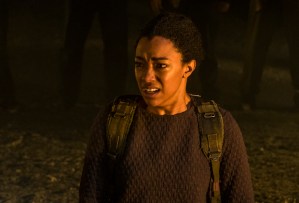 ABRAHAM’S FAREWELL TO SASHA | It was Michael Cudlitz’s idea to have his character flash his girlfriend a goodbye peace sign — and a throwback to the start of Season 6, Nicotero notes. “There’s a scene where Sasha’s going up the steps to the brownstone, and Abraham walks past, and he’s a little drunk… he gives her a peace sign. When we were on the set [before shooting Abraham’s death], we wanted to find an opportunity to have him speak to her without looking at her, because we were locked into what we had shot in the season finale [which made it clear that he had never turned his head]. So that was something that Michael added, and it was a beautiful little moment.”

THERE WAS NO ‘HAND JIVE’ | As the hour progressed, fans of the source material might have suspected that Negan was going to do to Rick what the Governor did to him in the comics. But “the right hand stuff was written to play into what was going to happen at the end of the episode with Rick and Carl,” Nicotero said. Just, “when we cut it together… it became something that we leaned into. It wasn’t a conscious, ‘Oh, let’s make everybody think we’re going to cut Rick’s hand off!’ There was enough going on in that episode as it was!”

HIS RESPONSE TO THOSE WHO SAY THEY’LL STOP WATCHING | Nicotero didn’t think that they’d necessarily follow through. “I would say that [their threat] means we have done something to affect these people in a way that they don’t necessarily know how to process,” he suggested. “Listen… I’ve been shocked at the turns of events on [Game of Thrones]. But you know what? I still love it. And I’m still committed to seeing where that story goes. So I think it’s a knee-jerk reaction that people have, because they care about these characters. That’s a tribute to every single actor on our show that has perished. It’s unfortunate that people want to take a negative spin on it… [and especially] if that’s really what’s going to happen [and they’ll stop watching], because the show still has a lot to offer!”

How about you? Will you be sticking with the show? Hit the comments.