NBC’s Timeless heroes will be shaken, if not stirred, when they bump into James Bond’s creator, Ian Fleming, this Monday at 10/9c.

Once again nipping at Flynn’s heels, Lucy, Rufus and Wyatt travel to the 1940s to keep an atomic weapon from falling into the wrong hands, and too soon into World War II. There, they meet James Bond’s creator, during his time as a cunning MI-6 agent.

Sean Maguire spoke with TVLine about channeling “the godfather of spy novels” (crash course on German, included!), as well as his upcoming (and improbable) return as Once Upon a Time‘s dearly departed Robin Hood.

TVLINE | Under what circumstances do we meet Mr. Ian Fleming?
We meet him doing his “day job,” before he became famous. I suppose I knew it, and some of my friends knew it, because we’re British and Bond fans, but a lot of people didn’t know that Ian Fleming was actually a genuine MI-6 spy during the war, before he wrote the famous novels. We get to see where the inspiration for Bond presumably came from, which for an actor is like a day at a candy factory.

TVLINE | How do Lucy, Wyatt and Rufus each take to him?
I can’t praise Jim Barnes, the writer, enough. It’s one of the best one-hours I’ve had the pleasure to be involved with, partly because it’s such fun subject mater, but also because of the characters. Whether it be Rufus, who’s obviously dealing with the “double agent” aspect of his own character, or Wyatt, who’s like, “F–k it, we’ve got to do what’s right, to hell with the rule book,” which he and Fleming see eye to eye on. And then there’s Lucy — Fleming not only fancies her and wants to flirt with her, but he also sees that she’s a capable agent. He presumes she’s a fellow agent, not just a historian. All three of the main characters get to have an interesting little side part with Fleming.

TVLINE | The synopsis says the four of you attend an “uncomfortable party.” What’s uncomfortable about t?
Well, it’s a party full of Nazis. [Laughs] That’s a good way to start making things uncomfortable! But there’s a gathering of the SS hierarchy to preside over the launching of missiles at innocent targets, so the gang and Fleming’s mission is to prevent this mass destruction weapon from being fired into Belgium, killing millions. It’s high stakes, a lot like a Bond film!

TVLINE | How’s your German?
I did not speak a word of German before I did this, and when I read the audition sides, it had just one thing in German. I have a good Austrian friend who came over and worked with me for a few hours. Then when they gave me the role, there were about six or seven scenes in German, and I was like, “Oh! This is an issue, because I don’t speak German,” but I got a fantastic coach and we just worked and worked and worked on trying to get it to sound as real as possible. I’m sure there will be some German fans saying I didn’t say something quite right, but you have to bear with me — it was like trying to learn the guitar in two days. Getting to perform in another language really made the experience more heightened for me, and thus more enjoyable.

TVLINE | What if anything were your surprised to learn about Ian Fleming, as you did this?
Things about his personal life, away from being the spy and the famous novelist. He had a slightly questionable approach to his love life, let’s say. He’s a very odd, complex, not-easy-to-sum-up-in-a-media friendly-sound bite kind of character. 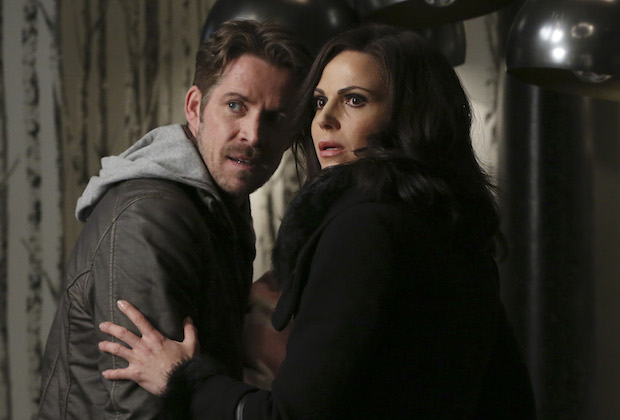 You’re clean-shaven in this. Did you have enough time to grow back your scruff for your return to Once Upon a Time?
I’m working on it as we speak! I’m going back up pretty soon, so I’m starting to feel slightly more bearded again.

TVLINE | What can you say about the how and the why of Robin Hood’s return?
I can say why from my point of  view: For one, I was very nicely asked. And two, as we discussed the last time you and I spoke, I feel that a lot of people weren’t loving how that abrupt end came about. I said to you that I was disappointed, too, that the fans did not get an end to the character that they wanted or maybe deserved, so hopefully the idea is to come back and maybe give a bit more closure to this character. I actually don’t know all the details, just the premise of what the [series creators] pitched to me, and I thought it sounded very interesting. Fingers crossed they’ll do their usual bang-up, good job and the audience can maybe see a last interesting adventure for Robin Hood.

TVLINE | Did the fact that it’s for multiple episodes sell you on returning? If it was just a one-off, might you have politely declined?
No, the prerequisite was “What story do you want to tell?” I sort of said, “I’ll go first: If it’s this or that, that might not be the ideal thing for me. But if the story is something that we all feel is an exciting chapter to tell, that’s the deal-breaker. That’s really what it was all about, whether it was one episode or 10. I obviously had no intention of going back, because I, like they, felt that that was it and it was done. But the story that they pitched sounded interesting, and they seemed excited about it. Hopefully, the audience will enjoy it.

TVLINE | And safe to say you’ll be working with Lana Parrilla again — maybe twice as much, now that there are two of her.
Yeah! That’d be great to work with both of her. Because I like both of her. If I get to be in a scene with both of her, that’d be double the fun!