Forever, it seems, we’ve known that, more than just about anything, Owen has wanted to be a father. (Heck, you can tell just from this picture of him with Harriet, can’t you?) And in Thursday’s Grey’s Anatomy, it sure looked like Amelia was about to make her husband’s dream — as well as our very early fall preview — come true. Were the newlyweds really expecting? Read on and find out.

‘TELL ME WHEN IT’S REAL’ | As “Both Sides Now” began, Amelia realized — because it was April’s first day back at Grey Sloan, not three days earlier — that her period was late. When Mer found her former sister-in-law looking “super sketchy” in the supply closet, she asked if Amelia was looking for drugs. When the newlywed balked, Grey sheepishly argued, “I’m supposed to ask if I care, right?” Upon being informed that Amelia was expecting, Mer sweetly offered her congratulations… until she learned that Mrs. Hunt wasn’t sure, she was just late. “So this isn’t real,” Grey said. “I hugged you, and you haven’t even peed on a stick yet?!?” At least Mer was able to show Amelia where the pregnancy tests were hidden. Off that, the maybe-mom-to-be was about to talk to Owen when he volunteered to babysit Harriet for Jackson. (And distractions don’t get much bigger or cuter.)

As Mer blabbed about Amelia’s possibly delicate condition to Maggie and Stephanie, and Amelia spilled the beans to April, Owen struggled with Harriet, asking Ben, “What is colic, anyway?” and bristling when the baby calmed down immediately in Alex’s arms. Finally, Harriet fell asleep on Owen, which, as any parent knows, is freakin’ heaven, and his wife… mmm, she became significantly less psyched about filling in Owen about their potentially expanding family. “I didn’t have to do this last time,” she told April, “because [the father] was dead.” In the hour’s final moments, Amelia left a pregnancy test for Hunt to find. “Are you pregnant?” he asked. “I might be,” she replied. “Do you wanna find out?” In response, he kissed her. (The most romantic way there is to say “Duh!”) Aaand… in the end, it turned out that she wasn’t expecting. 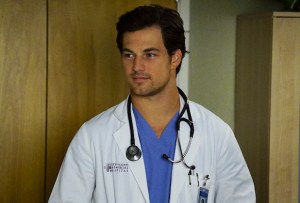 ‘I’M GONNA GET HER’ | While Maggie recruited Stephanie as “the best resident” for a surgery, irritating Jo and Amelia to boot, and Bailey picked Andrew to help her give a grandma a liver transplant (even after he didn’t know what made Miranda Ed McMahon, or even who Ed McMahon was!), Mer continued pushing Nathan away, which, at this point, must be quite a workout. Since Maggie’d told him that their AC was on the fritz, he offered to “share [his] with a colleague in need” — Grey. Though she was tempted — the house was a sweatbox — she turned him down, cracking, “You need a cooling blanket.”

Only minutes into the episode, Chelsea, a patient of Mer’s admitted with dehydration, developed complications that necessitated a liver transplant. Since Chelsea’s twin, Chandler, was pregnant and therefore ineligible to donate her liver, you knew to cue Grey’s clash with Bailey in 3, 2… “You try to have one damn day of joy around here!” Miranda sulked before asking Granny to give up her place on the transplant list to save Chelsea. Bailey was sure the old lady would make the sacrifice for the younger woman, but instead, she decided, “Screw her!” prompting Mer to brand her an “organ hog” and Richard to label her a “selfish old biddy.”

‘THIS IS FOR THE CHRISTMAS CARD!’ | As the prized liver arrived, Alex pleaded with Mer not to coerce Granny into relenting and giving up the organ. Miraculously, it worked. Maggie and Stephanie lost their patient, which might have been just as well, as the joke Edwards would’ve told him on his request would likely have killed him, Pierce said. Also, his demise freed up a liver for Chelsea. Watching Chelsea get her liver, Andrew told Jo to get her “self-pity gland” checked — “it’s incredibly swollen,” he joked.

So, what did you think of “Both Sides Now”? Hit the comments.