Apparently, Meredith never learned how to tell when she was fighting a losing battle. In Thursday’s Grey’s Anatomy, although her eyes got that certain sparkle in them whenever Nathan was around, she continued to rebuff his every attempt to get closer to her… but in such a cute, flirtatious way that, of course, he had to try, try again. Did he finally succeed in convincing her to spend time with him outside of Grey Sloan (and her SUV)? Read on and find out.

‘WE’RE IN THE CLEAR’ | As “Falling Slowly” began, Alex was at the clinic, griping to Meredith about how much he hated it there. She offered “solidarity and all of that,” but his supervisor, Nurse Tamir, was clearly not a Karev fan. Later, at Grey Sloan, having followed Grey’s orders and gently turned down Maggie’s request for a date, Nathan felt that, bullet dodged, he and Mer were now free to hang out. Alas, “I don’t hang out,” she informed him, adding that “we are not that type of friends.” What kind were they, then, Riggs wanted to know. (Frankly, didn’t we want to know, too?)

Complicating matters was the fact that Maggie was being totally weird around Nathan, and he backed Mer when she and Owen disagreed about whether a patient injured in a glider-plane accident needed surgery. “We make a good team,” Riggs noted. Hmm… but did they? It seemed less so when the patient’s condition took a nosedive — and she wound up as paralyzed as her paraplegic husband. Understandably upset by this development, Mer wondered whether Nathan had sided with her because of (cough) “you and I.” Insulted, he spat back, “I agreed with you because you were right, not because you were you.”

At the end of the hour, Mer told Nathan that she couldn’t “have another case where I question my medical decisions or yours” and asked if they could just be colleagues. “Sounds stuffy,” he noted. He was just asking why they couldn’t be friends, at least, when Maggie walked up. He covered, which led to Pierce thanking Mer for talking to him for her. (As if.)

‘FIGURE OUT YOUR LIFE ON YOUR OWN SCHEDULE’ | When Alex asked for an hour off from the clinic, Tamir called him on considering his duties there “grunt work” compared to what he did in “the hallowed halls” of the hospital, and turned down the request. The nurse wouldn’t even allow Karev to do anything that involved cutting into a patient since he wasn’t allowed to perform surgery. Eventually, Alex was tasked with caring for a teenage alcoholic, and brought the subject to his lunch break with his pals at Grey Sloan. “This is not the cafeteria, Karev,” said Tamir upon locating his lackey.

Later, Richard intervened with the young drunk, Emma, playing good cop to Alex’s bad. But Webber’s effort was such a disaster, he seemed to accidentally dislocate the girl’s shoulder. When Jo arrived as Karev’s surgical consult and they, as usual, had words, he finally threw up his hands and walked in order to make his appointment on time. However, he’d no sooner boarded his bus than he asked to be let off, as he suspected alcoholism wasn’t Emma’s problem. Quietly, Alex delighted as Richard delivered the correct diagnosis that he wasn’t allowed to, and ended the day oddly happy, despite the fact that his lawyer thought he was headed for the slammer. 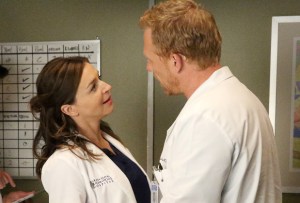 ‘SHE’S YOURS NOW, I’M NOT TAKING HER BACK!’ | In other developments, the honeymoon appeared to be ending — already?!? — for the Hunts. Amelia’s natural Amelia-ness led to questions like, “How can we have children? I barely know you!” Mer offered Owen her support but jokingly refused to take back his wife. It didn’t help that even Nathan seemed to know more about Hunt than his missus did, and Amelia knew more about Stephanie than she did about her husband. “I should’ve married you,” Shepherd told Edwards. That night, Owen reassured Amelia that she could tell him anything, and then, they took turns confiding in one another horrible incidents from their pasts. “We’re OK, right?” she asked afterwards. And, as a matter of fact, not only were they OK, but there kids would be, too. So “let’s not wait,” Owen said. (According to the scenes from next week, they didn’t!)

‘IT’S A LIE!’ | While Ben discovered Jackson sleeping standing up at work, April crashed in an on-call room and informed Stephanie that it’s a fallacy that moms are supposed to make Zs when their kids doze off, because “babies don’t sleep!” In surgery, Avery complained to Warren that he felt obliged to drink the coffee that Kepner informed Robbins she felt obliged to make for them every morning. “So move out,” Arizona suggested. That night, the exes had a little tiff about their attempts to co-exist/cohabitate, but in the end, neither of them wanted April to pack up. They even called it quits with the coffee thing. #progress

‘NO ONE’S GONNA KNOW IF WE TALK TO EACH OTHER’ | Finally, Bailey informed Andrew that “you are not to discuss [your case against Alex] within the walls of the hospital.” Which he said shouldn’t be a problem since pretty much no one was speaking to him, anyway. When Arizona inquired about the proceedings, DeLuca shot her down, citing chief’s orders. Yet it seemed like he and Jo were still on OK terms, since he was the only person who knew her secret.

So, what did you think of “Falling Slowly”? Is the show hooking up Andrew and Jo? Reuniting Japril? Hit the comments with your theories/hopes/concerns.