In the teasers for “Chapter 5” of American Horror Story: Roanoke, Matt informed us that “there was no way out” of the pickle in which he and Shelby had been left at the end of “Chapter 4.” But, since we’re nowhere near the end of Season 6, presumably, Wednesday’s episode couldn’t reduce them to, as Mrs. Miller put it, “nothing more than prey” to The Butcher & Co. So how did the couple escape from the mob on their doorstep? Read on and find out. 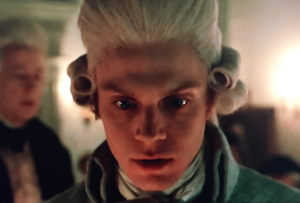 PAST TENSE | As the episode began, historian Doris Kearns Goodwin flashed us back to the days of Dandy’s ancestor, Edward Philippe Mott (a bewigged Evan Peters) as he built to house his beloved artwork what would become the Millers’ home. No sooner had he moved in with his manservant/lover, Guinness, than supernatural shenanigans began to bedevil him. After brutally punishing his staff for the mischief, the aristocrat learned — in the most lethal way possible — that The Butcher and Ambrose were really to blame. (Side note No. 1: Before Edward was taken outside and killed, didn’t his bedroom bedlam bring to mind the ghoul who emerged from a mattress in Hotel? Side note No. 2: Shout-out to Dandy’s demise in 1952!) 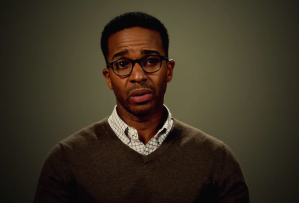 FIGHT OR FLIGHT | Back in present day, The Butcher was offering the Millers “a merciful death” if they surrendered to her to re-consecrate the land. Rather than do so, Matt pleaded with Shelby to take Flora, run for the truck and go. Unfortunately, before they could get out, “you could feel the house coming alive around you,” as Shelby put it. Ghosts of all sorts “corralled us like animals,” said Matt, “for an easy slaughter.” However, when things looked bleakest, the trio were led to the relative safety of the woods through tunnels beneath the house by Edward, who noted that “the trophy misprized is to die in peace.” In no time, they’d been apprehended by the Polks, whose mama (Frances Conroy) had kept what was left of Elias alive. At least until she realized that he didn’t taste good. Turned out, the Polks had only wanted the Millers’ house “to keep it empty for The Butcher” as per an age-old agreement.

THE AXE FACTOR | Meanwhile, Lee was seething over Shelby having gotten her picked up for questioning in Mason’s murder. When she was finally released, she learned via texts from Matt that he had Flora. At the same time, the Millers managed to escape from the Polks before they could be driven back to their haunted house to be sacrificed to The Butcher. That is, they escaped briefly. Lot (Chaz Bono) soon retrieved them, setting the stage for his mom to whack Shelby’s ankle with an axe to ensure that they wouldn’t run again. At that point, “I gave up,” Matt admitted. For her part, Shelby reflected on all the things she wouldn’t get to do in her life — like, erm, open her own yoga studio. Returned to The Butcher, the Millers watched in horror as she prepared to slaughter Flora. Lee had just arrived on the scene when Ambrose rebelled against his mother, dragging her into the fire (burning up with her). Before Piggy Man could finish what The Butcher had begun, Lee rammed him with a car, and she, Matt, Shelby and Flora fled to a nearby hotel.

So, what did you think of “Chapter 5”? Excited to finally get some Cheyenne Jackson in “Chapter 6”? Hit the comments.