We don’t know The Butcher well yet, and neither do the Millers. But if the audience of American Horror Story: Roanoke can already tell that she isn’t the sorta vengeful, cleaver-wielding ghost with whom one should lightly make and then break a deal, then surely, they should understand that, too, right? Right. Nevertheless, Shelby and Matt reneged on their agreement with the erstwhile Thomasyn White in “Chapter 4” Wednesday, setting the stage for more of the kind of supernatural shenanigans for which the word “Croatoan” was apparently invented. Read on, and we’ll go over the lot of ’em. 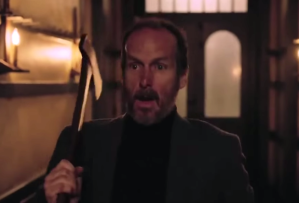 PIGGING OUT | As the episode began, the Millers were reeling from the events of “Chapter 3.” In particular, Shelby wanted to know who the hell Matt had been screwing in the woods. “I don’t remember” a woman or anything at all, Matt tearfully swore. And, finally, she realized that, regardless of what had happened, “he wasn’t culpable.” Heading for the shower later, Shelby was stunned to encounter Piggy Man. Matt saved her, then Elias, showing up out of nowhere, saved them both with an axe and a well-timed invocation of Croatoan.

PROFESSOR PLUMB CRAZY | After explaining that Croatoan was “a word of dark power and blood magic,” the professor informed the couple that he was “important to [them] for [their] survival.” Though they doubted it, they nonetheless allowed him to tell them about some of the unfortunate previous inhabitants of the house, including nurses Bridget and Miranda (one of whom had her arms ripped off on The Butcher’s command!). Convincing the Millers that, owing to the lunar cycle, it was past high time that they skedaddled, Elias had them halfway out the door before they revealed that The Butcher didn’t have their niece, Priscilla did. No prob, he said. He knew where she liked to play. 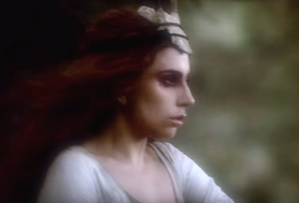 WHO’S THE BOSS | Upon being led into the woods by Elias, the Millers spotted Lady Gaga’s character (who really needs a name, thank you). By Shelby’s own admission, she lost control and went chasing after her husband’s mysterious one-boink stand and wound up coming face-to-face with a pack of spirits. Among them were Piggy Man, Miranda and Bridget, and Priscilla — with Flora! No sooner had Elias asked the ghost to return Lee’s daughter than he was shot by several arrows. Running home in horror — how else? — the couple were greeted by Cricket, who asked if they were ready to do things his way now. First, he assured them that Flora wasn’t dead, merely lost. Then he lit into them for having him promise The Butcher they’d vamoose and then, well, not. By and by, he headed into the woods, returning with news that he hadn’t seen The Butcher but “the bitch with the real power” — Gaga’s alter ego.

WITCHY WOMAN | Desperate to survive his encounter with Gaga, Cricket had offered her the only thing that he knew she wanted — Matt. In turn, she’d showed him a past in which the lost colony, which wasn’t actually lost at all, practiced her cruel ancient religion. When Ambrose balked, Gaga instructed his mother to “release the power of the blood moon” — which, it turned out, meant murdering the colonists and sacrificing herself in order to tether them to her as well as the land. With all this new knowledge, Cricket was sure that he could put an end to the Millers’ nightmare that very night. He just needed a few things from his hotel room. Ubering his way there — and inquiring whether the driver had ever heard the term “gay for pay” — the psychic almost literally ran into Flora on the road. 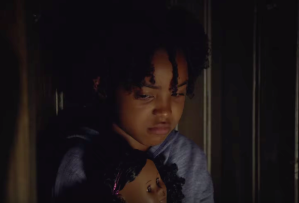 INSIDE OUT | Hours passed, and still, Cricket didn’t return to the Millers’ haunted house. So many hours that “days were bleeding into nights,” according to Matt. Hearing noises outside, he went to investigate and discovered in the storm cellar Lady Gaga. “Debts must be paid,” she told him. By the time Shelby started heading out there, Gaga was opening herself up to Matt through “the most intimate connection” he’d ever experienced. Thanks to it, he became aware that, while she’d once been an English girl descended from the druids, she’d been transformed into “something new, something original.” What’s more, “she wanted me to join her,” he said, “and I would have.” Before he could, Shelby started screaming, as The Butcher, Ambrose, Flora and a whole lotta colonists showed up on the Millers’ doorstep. Alas, “the time for bartering” was ended. The Butcher was about to kill Flora when Priscilla intervened. At last, Shelby and Matt were able to retrieve their niece. Unfortunately, The Butcher still had Cricket — and after she stabbed him, Ambrose disemboweled him. “Her message was clear,” Matt said. “We were next.”

So, what did you think of “Chapter 4”? Hit the comments.