Supergirl has some weighty decisions to make in Monday’s second season premiere (The CW, 8/7c), ranging from who she can trust to what she should wear on a very special date — and who are we to say which is more important?

TVLine spoke with executive producers Andrew Kreisberg and Ali Adler about the good (Superman!), the bad (Project Cadmus!) and the to-be-determined (Mon-El?) facing the Kryptonian crimefighter in Season 2:

TVLINE | So are we picking up right where we left off?
KREISBERG | Yeah, [Monday’s premiere] opens with her finding the pod. But there’s a little bit of an action sequence before it, filling it out, which is exciting. It’s what you didn’t get to see at the end of last season, because we ran out of money.

TVLINE | But you always knew that Mon-El was going to be in the pod?
KREISBERG | Oh, yeah. Yeah, yeah. We always knew. You know, we might have been coy in the press, but…

TVLINE | Educate us a bit on Mon-El. Who is he in the scheme of things?
KREISBERG | Mon-El is actually from a sister world to Krypton. He’s from Daxam, so his powers aren’t quite at the same level as hers, but he’s long been associated with Superman and with Supergirl in the comics and he’s…

TVLINE | A friend or foe?
KREISBERG | Both — and we’re putting our own spin on the character, which we always try to do, so that we’re not spoon-feeding direct mythology right out of the comic books. We’re trying to make it interesting for everybody, so we’re kind of excited about it.
ADLER | I always wish I could have seen those first few weeks and months of Kara experiencing life on Earth. I miss not knowing her point of view at that time. What’s been exciting with Mon-El is that he lands and has the same questions she might have had. But this time, she’s the teacher guiding this fish out of water through his first days on Earth.

TVLINE | What’s going to thrust us into action this season?
KREISBERG | There’s a chain of events that forces Superman and Supergirl to team up, and them getting to spend some time in each other’s lives, which they haven’t previously gotten to do. That’s sort of the engine that starts the season. And Project Cadmus, this evil organization dedicated to eradicating alien life on Earth, their two biggest targets are Superman and Supergirl.

TVLINE | Did you feel like addressing the Superman in the room was something you needed to do in Season 2?
KREISBERG | That is actually part of the story of the first two episodes: “Why are you in one city and I’m in another?” Part of the emotional story is they kind of want to be together, because they both have that sense of longing, missing that that sense of home and family that they both lost. But the world won’t let them be together.

TVLINE | Is Superman brought in to teach Kara a specific lesson?
ADLER | Actually, I think you’ll be surprised to find it’s the opposite. Kara definitely teaches him, as well. This Supergirl — it’s her show, it’s her point of view — and we waited until she literally saved the earth to bring him on. Yes, he has more experience as Superman, but they both have a lot to teach each other. 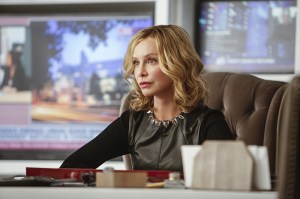 TVLINE | What is Kara up to professionally? What does she choose to do over at CatCo?
KREISBERG | We don’t want to give that away just yet, but so much of this season is about Kara figuring out that aspect of her life. She’s really come into her own as Supergirl, and she doesn’t really doubt her powers or her ability to function as a superhero and as the protector of National City, but trying to figure out what Kara’s going to do with her life — what she’s going to do with Jimmy, what she’s going to do with her job — makes up a large portion of the early part of the season.

TVLINE | Is this going result in, like, maybe 10 percent fewer workplace interactions for her, James and Winn, or do they still finding ways to see each other, to be together at the office?
KREISBERG | There’s still going to be ways for them to be at the office. The workplace is not going away. But Winn is actually going to get fired and go work for the DEO, which is going to be really exciting.

TVLINE | How would you compare Snapper Carr (Cougar Town’s Ian Gomez) to Cat as a supervisor?
KREISBERG | Snapper is going to make Cat look warm and fuzzy. [Laughs] He’s very brusque. He does not think Kara is spunky or cute, and he is not interested in mentoring anybody. It’s sort of like when you spend two years working for a boss and you learn all their idiosyncrasies, and then your reward for doing such a great job is… to get a new job where you know nothing. Suddenly you’re on the bottom again and you’re dealing with a new boss that you don’t know. That’s sort of what Kara is going through, where as difficult as she thought it was working for Cat, the truth is she was actually great at her job, and she knew what her place was. And now she’s thrust into this new role where she’s lost and at sea and having to figure that out.

TVLINE | What brings Lena Luthor to town? Does she have chip on her shoulder?
KREISBERG | She does have a chip on her shoulder. In our iteration, Superman has finally defeated Lex and sent him to prison, and his company has fallen into ill repute because he’s obviously associated with all of these terrible things that are happening. So Lena is renaming the company from Luther Corp to LCorp. She’s trying to change the face of her company of her family — and how do you do that when every time she walks in a room, it’s like, “Oh, that’s Lena Luthor,” followed by whispers and “Never trust a Luthor.” Part of her journey in these opening episodes is getting Kara and Clark to overcome their own prejudices, so it’s really interesting where she’s coming from. She says to Kara in the opening episode, “Can you imagine, every time you go somewhere, people judging you? Not based on you, but based on the actions of your family,” and Kara, with Superman as her cousin, can actually relate. 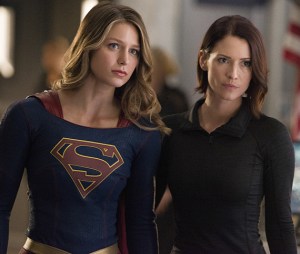 TVLINE | Will Alex and Kara still have each other to lean on, and vice versa?
ADLER | Alex Danvers is someone I created, and she’s been such a voice of strength and power — a real Supergirl in her own right. The sisters are always going to be at the core of the show. Last season, Alex learned what being powerful is about, and she will find that voice for herself. That’s what this season is about for a lot of characters, finding their own power.

TVLINE | Is Maggie Sawyer any kind of threat to us, or purely an ally?
KREISBERG | She’s an ally. She’s part of the Science Police, which is the portion of the police department that deals with anything out of the ordinary. We’ll be bumping into her a lot and questions of jurisdiction versus the DEO will be coming up. Maggie is also strong proponent for alien rights, which is going to be coming up.

TVLINE | Anything you can say about Metallo?
ADLER | Just that it’s really cool what happens with him. He’s incredibly dynamic, and we’re really thrilled.

TVLINE | Why are you bringing on this Miss Martian?
KREISBERG | We wanted to have a great story for J’onn, David Harewood’s character. She and the Martian Manhunter are tied together in the comic books, and we wanted to expand his story and his world. She’ll be coming in in Episode 3 and recurring.

TVLINE | Lastly, is there a Big Bad for Season 2?
KREISBERG | Project Cadmus is going to be the Big Bad for the early part of the season, and then a new Big Bad will emerge that we want to keep on the down low.

Your thoughts on these latest Season 2 teases? Drop ’em in a comment below.