In the wake of this weekend’s relentless coverage of Donald Trump’s tape scandal, chances are you’ve had more than your fill of the word “p—y.”

Which makes it all the more impressive that the premiere of HBO’s Insecure finds creator and star Issa Rae (Awkward Black Girl) grabbing the noun (sorry), reclaiming it and making it the centerpiece of a wickedly funny, unapologetically profane freestyle rap that serves as the half-hour’s comic climax.

“Broken P—y” is hardly the only LOL moment in a pilot episode with a guffaws-per-minute ratio rivaling that of its critically lauded network compatriot Veep. The fact that it also serves as a gateway to a genuinely emotional and yet still very funny confrontation between Rae’s high school youth liaison (also named Issa) and her successful attorney BFF Molly (newcomer Yvonne Orji) means Insecure is inarguably series-recording fodder for your already straining DVR.

Here’s the setup: We meet Issa, who works for a nonprofit that works to inspire inner-city teens, fielding brutal questions and observations from a room full of high-schoolers. “Why you talk like a white girl?” “My dad said ain’t nobody checkin’ for bitter-ass black women anymore.” And, cruelest of all, after Issa declares she’s not bitter, just unwilling to compromise, one girl wryly joking to her pals, “Her outfit settled for less.” 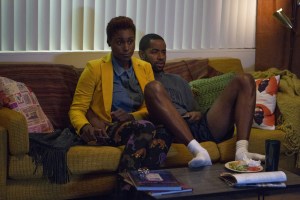 Issa’s career crisis extends to her home life, too. She’s just turned 29, and her live-in love Lawrence (The Game‘s Jay Ellis) thinks that a movie rental and a trip to 7-Eleven for dinner is an appropriate way to celebrate Issa’s milestone. Days later, when Lawrence jokes about Molly’s overly high standards in men causing her chronic singledom, Issa wonders aloud if she and her man should get their “s–t together separately.” It’s all part of her self-proclaimed philosophy of being “aggressively passive,” which ends with Issa’s undramatic exit and night out with Molly, who’s just been dumped by a promising romantic prospect via text (complete with sad-face emoji).

When said club excursion finds Issa not-so-accidentally running into her ex Daniel (who’s just sent her a casual “I miss you” b’day message on Facebook), she accepts his dare to grab the open mic and bring her rap dreams out into the open. Trouble is, as the white-hot track to Kelis’ “Bossy” begins to boom through the sound system, Issa discovers inspiration in her prior conversation with Molly, declaring the latter woman’s ladyparts to be “broken.” While that chat was funny in private — right down to Molly’s reenactment of the “Marge Simpson groan” – it’s mortifying to the lovelorn lawyer out in public, leading to a raw spat that’s interrupted when Issa tries to surreptitiously send a text message to Daniel smack in the middle of it. 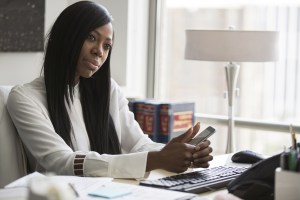 All’s well that ends with Issa showing up at Molly’s with a bag of Cheetos and a jar of ranch dip — especially after Issa’s trip to Daniel’s ends abruptly with the “I’m not lookin’ for a relationship” refrain that just gobsmacked Molly a few days prior. But with Issa’s personal and professional fortunes in flux, and Molly struggling to find a love story that matches her corporate one, Insecure will hopefully continue to bring us hilarity — through the eyes of modern, ambitious and endearingly real black women — all season long.

What did you think of the Insecure premiere? Grade it in our poll below, then sound off in the comments!