David Letterman would not have run his fingers through Donald Trump’s hair.

In an interview with the New York Times, the late-night icon was asked about Jimmy Fallon’s softball treatment of Trump during the Republican presidential nominee’s visit to the Tonight Show last month.

“If I had a show, I would have gone right after him,” he told the Times, adding that he would have specifically taken Trump to task for mocking the physical disability of reporter Serge Kovalesk, who suffers from a congenital joint condition. “I would have said something like, ‘Hey, nice to see you. 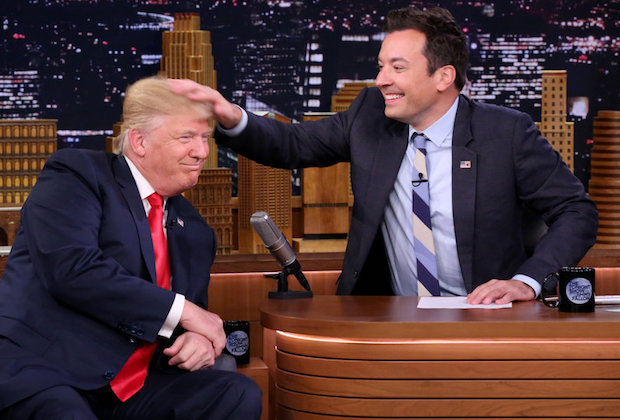 Letterman went on to characterize POTUS Candidate Trump as a “damaged human being,” which is a far cry from the relatively harmless version of Trump he invited onto his talk shows in the past. “I’ve known Donald Trump for a long time and I always thought he was exactly what New York City needed to have: the big, blowhard billionaire,” he said. “’By God, I’m Donald Trump and I date models and I put up buildings, and everything is gold.’ Nobody took him seriously, and people loved him when he would come on the show. I would make fun of his hair, I would call him a slumlord, I would make fun of his ties. And he could just take a punch like nothing. He was the perfect guest.

“So now, he decides he’s running for president,” Letterman continued. “And right out of the box, he goes after immigrants and how they’re drug dealers and they’re rapists. And everybody swallows hard. And they think, oh, well, somebody’ll take him aside and say, ‘Don, don’t do that.’ But it didn’t happen.”