In Thursday’s Grey’s Anatomy, Nathan suggested the unthinkable to Meredith: Why don’t they just tell Maggie the truth about them? Instead, Derek’s widow doubled down on her lie and came up with a pretty funny alternative way to defuse the situation. What was it? Read on and find out!

‘BE A SISTER, SISTER!’ | As “I Ain’t No Miracle Worker” began, Maggie was complaining to Mer and Alex that she’d “ruined work” by asking out Nathan. Now “his ‘no’ is always going to be there like a bloated corpse,” she said. Grey, a little too obviously, didn’t even want to discuss the matter. “This isn’t a real problem,” she insisted. “You’re making it one.” Later, after Riggs threw out to Mer his “crazy” idea about being honest with her half sister, Grey decided that he should go out with Maggie after all. Only, on their date, he should turn off the charm. In other words, as he put it, “be a jerk… with bad breath.” Yes, exactly! Funnily enough, even as Mer kept her one-night stand at arm’s length, sparks flew between them. They even bonded on a deeper level when he admitted that he dreamed of waking up to find Megan alive and well, and she reluctantly confessed that in her version of the dream, Derek knocked at the door and apologized for being gone so long — he’d just lost his keys was all. Finally, toward the end of the episode, Amelia — having been filled in by Maggie on Mer’s disinterest in discussing her love life —instructed her sister-in-law to start lending an ear… or else. “Don’t make me move back in,” the new Mrs. Hunt playfully threatened. (Of course, no way was Amelia moving back in since, she noted, “married sex is dirtier than I expected.”) Alas, Grey passed up yet another opportunity to be straight with Pierce when the latter asked, “Any guy you’re into?” Oh, Mer!

‘DO I NEED TO MOVE?’ | Back from visiting Callie in New York, Arizona was awkwardly reunited at Grey Sloan with Andrew, who told her that his condition was “better than it looks.” Later, her roommate revealed that, although no one said it aloud, he could tell that everyone was mad at him for getting Alex in hot water. Assuming that Robbins was angry with him, too, he feared that she’d want him to move out. To reassure him that that wasn’t the case, she gave him a sweet hug. Alex, on the other hand, she was ticked at — for not returning her calls and texts, and on top of that, risking “the career that I helped you build.” Initially, Karev was so sick of being lectured that he told her to “shut up and back off.” But, as the hour concluded, he promised her that he was “gonna do whatever it takes” — including do his time at the clinic — in hopes of getting back to work at the hospital.

‘THE HAMMER WILL FALL’ | As the victims of a seven-car pileup were brought into Grey Sloan — of all things, a funeral procession had been hit — Miranda asked Ben to go pick up Tuck from school, where he’d struck another student. When Warren protested that the ER had been transformed by the accident into “a hot mess of art,” his wife stopped asking and instead told him to go get their son. Once the boy was at Grey Sloan, Ben couldn’t understand why Bailey wasn’t punishing him. She would, she said. She was just tired of dropping the hammer at work and at home. “You need a bad cop,” he deduced. “Deputize me.” Turned out, Warren was a pretty good bad cop. Exaggerating the story of what happened when Alex attacked Andrew — and using pics of DeLuca’s initial injuries to illustrate his point — Tuck’s dad seemed to convince the kid never to hit anyone again. 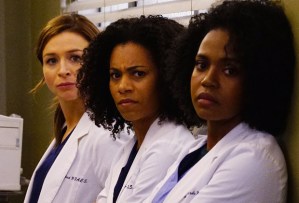 ‘TODAY I FROZE A WART’ | As Alex did his best to combat the monotony of his work at the clinic, April, too, yearned for the rush that she got from the ER — so much so that she showed up at Grey Sloan with Harriet in tow. Since the new mom’s incision had healed, she was supposed to move around, so why not move around the hospital? she reasoned. Also, as she confessed to Jackson, “I did not know a miracle could be so boring.” Naturally, things in the ER were anything but boring. In fact, at one point, the widow of the fellow whose funeral procession had gone so awry keeled over and died herself. And then came back to life! And it turned out that the couple’s long-estranged, pregnant daughter was the driver who ran into the hearse. So ya kinda had to feel for Kepner. How could changing diapers compete with that?!?

So, what did you think of “I Ain’t No Miracle Worker”? Glad to have Arizona back? Befuddled about why Mer isn’t doing damage control with Maggie by fessing up to her tryst with Nathan? Hit the comments.