As The Flash opens Season 3, Barry Allen has no care in the world other than to “meet cute” with onetime classmate Iris West. And as the premiere winds down, Iris is again foremost in Barry’s mind — but for entirely different reasons.

Having traveled back in time to prevent his mother’s murder (and then lug Reverse-Flash back to the present with him, to be locked up in a speed-dampening cage), Barry has “everything back” that Eobard and Zoom took from him. “I’m finally free,” he gloats to his prisoner. “I’m whole here.” Eobard — who dubs this tweaked timeline “Flashpoint” — however warns Barry that his actions birthed “a  fiction that will end us both,” at the hands of their common enemy — time. Eobard goes so far as to predict, “One day soon, you will be begging me to kill [your mom] again.”

But again, Barry’s focus is mild-mannered CCPN reporter Iris, whose attention he grabs by “finding” her dropped purse. After revising their connection, Iris agrees to go to lunch with Barry, news which pleases his parents greatly (though not as much as if he’d announced he was getting his own place). Stopping by the cop shop, Barry (again) covers for Joe, who apparently has (again) slept in late. Barry speeds over to Joe’s place, only to find the detective zonked out on the couch, hung over and covered in take-out. Barry apologizes to the sleeping giant before whisking him upstairs for a washing, brushing and dressing, and then back to the CCPD, where Joe can’t quite make out what just happened. One thing he makes clear, though, to his non-partner: Iris is off limits. But in this world, neither Barry nor Iris pay him much mind.

En route to lunch, Iris must admit that she finds it curious that she agreed to the date, which is unlike her. “Where’d you come from, Barry Allen?” she wonders aloud. But just then, Barry suffers the first of several painful “flashes,” the origin a mystery. Regardless, the date is cut short when news breaks about the speedster villain The Rival making mayhem. Iris abruptly excuses herself, while Barry speeds to the scene just in time to buffer Kid Flash’s tumble from a skyscraper. Barry unmasks the hero to discover it is Wally West. Back at Kid Flash’s “lair,” Barry learns that Iris is doing more than just reporting on crime, but helping her brother try to stop it. After Barry gets the 411 on Kid Flash’s origin story, Iris decides that only one person has the resources to help them best The Rival — billionaire app developer Cisco Ramon!

Indeed, Flashpoint Cisco is living large, with a model on one arm and a hand that cuts $20 million checks on the other. He’s not happy to see the Wests — their agreement was a friction-free speed suit in trade for no involvement in their crimefighting — nor does he have any idea who the “string bean” they brought with them is. But just as Barry appeals to Mr. Ramon’s good, true nature 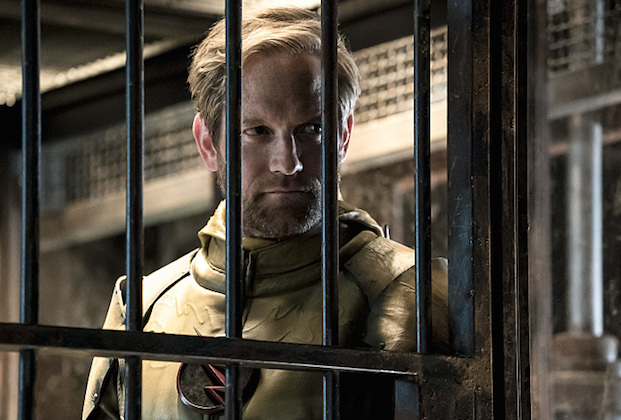 with an anecdote about his brother Dante, Barry suffers another painful flash.

Back in the warehouse, Reverse-Flash explains to Barry that he is suffering the side effects of Flashpoint, as the new reality begins “overwriting” his memories of the past. Soon enough, this reality will “set” like concrete, leaving Barry with no recollection of his original existence. “You have to let me finish what I started,” in killing Nora, Eobard beckons. But Barry ignores him, again, to instead suit up, grab Wally and Iris and bring them to Cisco, and come clean about Flashpoint. Just one thing is missing, as this “Team Flash” considers taking shape — pediatric ophthalmologist Caitlin Snow, who gets past her “kidnapping” to promptly help the two speedsters locate The Rival.

Before he dashes off with Wally to battle The Rival, Iris grabs a moment with Barry, to admit that “something has been off” in her life, but “it went away when I met you.” She then asks, “We were something else to each other where you come from, weren’t we?” When Barry confirms her inkling, Iris says they must have shared love, “because this is what love feels like.” “Since the day I met you,” Barry shares.

Facing off against The Rival at a sawmill, Barry and Wally plot to employ a “flank” attack, but the latter leaps into the fray from go, and for a moment gains the upper hand… until The Rival drives a piece of rebar through him. When The Rival conjures a pair of tornadoes, Barry — with a “Be The Flash!” nudge from Iris — believes in himself anew and unwinds the twisters, to the about-to-be-clobbered Rival’s amazement. The Rival leaps forth with a last gasp, only to get gunned down — by Joe, who learns of both Wally and Barry’s secret identities.

Back at Ramon Industries 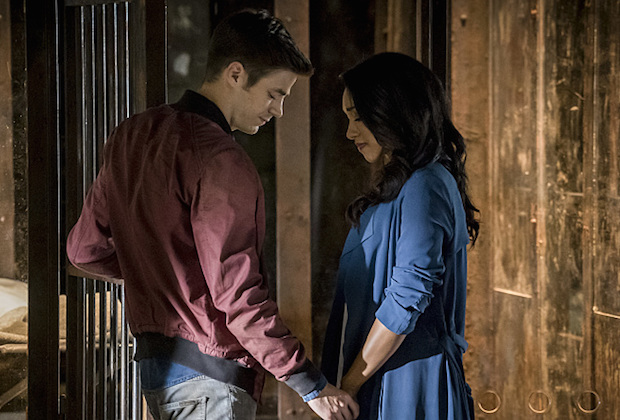 (which apparently has a sick bay), Wally clings to life but isn’t speed-healing. Barry invites Iris to help him make things right, by asking Reverse-Flash to… do that. “I need you to kill my mother,” Barry is forced to formally request. “With pleasure,” Eobard grins. Iris wishes Barry luck, punctuated by a sweet kiss, before the speedsters dash back in time.

With Nora killed anew, Barry back in the present is kicking back with Joe and Wally, who toast the dearly departed Henry Allen. Barry then asks, “Where’s Iris?” —  a seemingly innocent inquiry that puts Joe in a dark mood. After his dad storms off, Wally “reminds” Barry, “You know they don’t talk!” Oh God, Barry is left to wonder. What did I do?!

A final coda suggests that Flashpoint is perhaps not gone and forgotten, when an ominous, disembodied voice awakens Edward Claris, who in the other timeline was The Rival. “It’s time to wake up,” the villainous voice (courtesy of Saw’s Tobin Bell) declares, scratching its name into a nearby mirror: Alchemy.