To paraphrase Shakespeare: Oh brave new-but-kinda-old world, that has such creatures in it!

The premiere of HBO’s Westworld introduces us to a slightly futuristic world where people can slap down serious cash in order to frolic in a vast amusement park full of androids. The setting is the American Old West, which means that well-heeled patrons can have their fill of saloon girls, town-square shootouts and the like. Oh, and the androids don’t know they’re androids, or that they’re controlled by a team of scientists located in a futuristic hub near the park. They merely believe that they’re settlers on the edge of civilization, and they’re unaware that they basically experience the same day, every day. (If the concept sounds familiar, it’s because the J.J. Abrams/Bryan Burk/Jonathan Nolan-produced series is loosely based on Michael Crichton’s 1973 film of the same name.)

The first “host” — the series’ nomenclature for the androids — we meet is Dolores (Once and Again‘s Evan Rachel Wood), a sunny, bright-eyed young woman who lives with her parents and spends her days painting the surrounding vistas (which truly are stunning) and going into town to run an errand or two. As the hour progresses, we learn that the hosts have a vague idea that the “newcomers” (aka visitors to the park) aren’t like them, but the hosts are programmed not to think about it much more than that.

Dolores is sweet on another host, Teddy (30 Rock‘s James Marsden) who returns to town each morning on the train, poised to begin a budding relationship with her. It’s during one of these loving moments that we meet The Man in Black (The Rock‘s Ed Harris), who’s been “comin’ here for 30 years, but you still don’t remember me,” he says gruffly to Dolores, moments before bodily dragging her away to do icky things to her moments after her parents are shot and killed by robbers (whom The Man in Black then kills, shortly before he offs Dolores’ handsome honey). Dolores may be fake, but her terror is real. 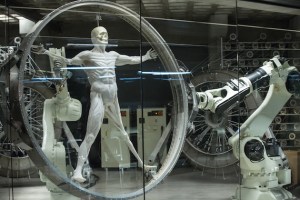 What stops the hosts from exacting revenge on the newcomers? Programming. Scenes inside the park’s control center — overseen by the technology’s aloof creator, Dr. Robert Ford (Silence of the Lambs‘ Anthony Hopkins), and his team — give us insight into how all of the park’s living creatures (yep, even horses) are created and controlled. Basically, all of the hosts have set storylines that they play out, with minor alterations here and there, every day. Bernard Lowe (Boardwalk Empire‘s Jeffrey Wright) is the park’s programming chief, a reserved man who’s got his own secrets (who’s that kid in the photo he looks at longingly?) and whose philosophy seems much more in line with Ford’s than with Westworld’s operations team.

The premiere takes us through several days in the park; in each one, Dolores wakes up to a beautiful sunrise and several other hosts wind up dying. But a glitch in a recent update has some of the hosts acting a bit wonky; Dolores’ father, for instance, finds a photograph (presumably dropped by a newcomer?) of a woman in modern-day garb, standing in what looks like a big city, and it seems to short-circuit him. When he — along with hundreds of other hosts — are hauled back to the command center for a diagnostic, he is ultimately decommissioned… but not before spouting some seriously creepy dialogue gleaned from bits of Shakespearean plays, Gertrude Stein, etc. (No worries, Ford says. He put it all in there himself. Seems like far too easy an answer to me…)

While Dolores’ dad is being sent down to cold storage — which brings him to tears, which is odd for an android, right? — we learn that despite her youthful glow, Dolores is the oldest host in the park and her core code seems to be functioning just fine; when we see her the next morning, back in her normal habitat, she doesn’t even flinch when a new host replaces the one that used to play her father.

But far more nefarious plots are afoot. After The Man in Black kidnaps and bleeds a dealer from the casino, he scalps him. “There’s a deeper level to this game. You’re gonna show me how to get there,” TMIB tells him, and later finds a maze-looking drawing printed on the inside of the host’s skull/scalp. (I didn’t look that closely, because, ew.)

Now it’s your turn. Grade the premiere, titled “The Original,” via the poll below, then hit the comments to elaborate on your choice!

Ready for the next episode? Read the Westworld Season 1, Episode 2 recap here!