The CW’s superhero slate hits the ground running on Tuesday, Oct. 4, when The Flash reveals its strange new world, followed by the returns of Arrow (on Wednesday), Supergirl (Monday, Oct. 10) and Legends of Tomorrow (Thursday, Oct. 13).

Since the comic books-based quartet — to a greater degree than ever (punctuated by the upcoming four-way crossover) — share a universe (if not an Earth), here’s a side-by-side(-by-side-by-side) review of their premieres, in the order they air. 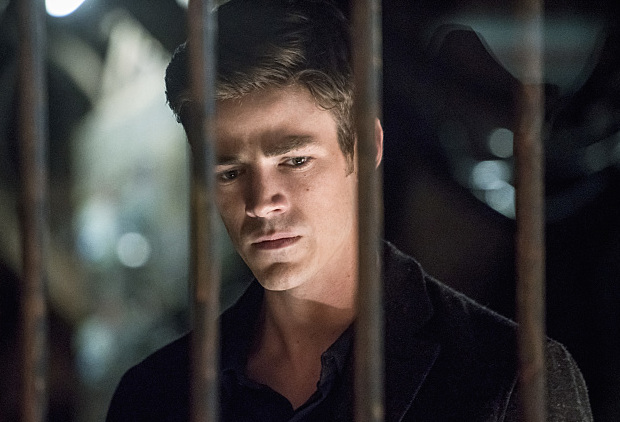 THE FLASH | Not surprisingly, The CW’s super lineup puts its bets foot forward with The Flash‘s Season 3 premiere, which straight away explores the ramifications of Barry traveling back in time to stop Reverse-Flash from killing his mother. As Grant Gustin foretold, this is a curated spin on the famous Flashpoint storyline — meaning, Barry is not aghast to realize what he hath wrought, but rather is quite OK with it. As Barry gloats to Eobard Thawne (played with the right amount of comic book-style flourish by Matt Letscher), he now has it all, with his mom alive and Dad never imprisoned, while a new, don’t-call-me-Kid Flash bears the burden of keeping baddies at bay. There’s only the matter of Barry having never gotten close (let alone close) with Iris West, but that sets the stage for sparkling scenes (as well as surprises that delight), thanks to the chemistry between Gustin and Candice Patton.

Of course, all is not really right in Barry’s new world, he comes to discover, and that ignites the engine that drives the rest of the opener — and introduces us to the slightly (or majorly) altered incarnations of other familiar faces (Danielle Panabaker has never been more charming). As anticipated since Flashpoint was hinted at in the finale, The Flash‘s return is a tremendous amount of timeline-tweaking fun, though the premiere closes with a gut-punch of a twist. 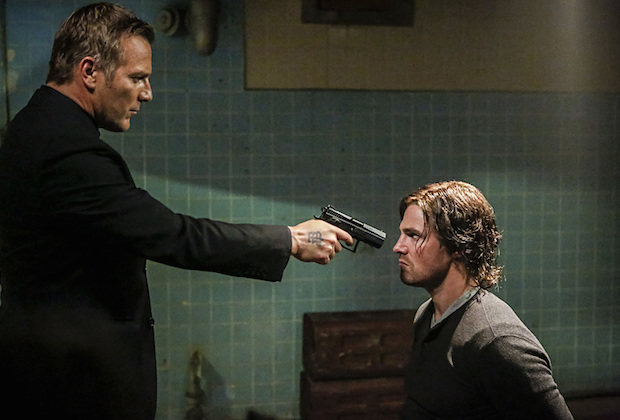 ARROW | Whereas The Flash is light on its feet, Arrow is back with — thankfully — what promises to be one of its more grounded, grittier seasons ever. There has been no convenient reuniting of the team during the off-season; rather, Diggle is back in soldier mode in Chechnya, while Thea is thrilled to have shed her bloodlust once and for all, now working as chief of staff to “Mayor Handsome” (as the papers dub him). Yes, Oliver misses the bull’s-eye as a politician, burning the candle at both ends as he is (and going solo on the nighttime streets at that). Running comms, Felicity is still is his ear (if nowhere close to his bed) and pushing for staff additions in the form of some independent vigilantes she has scouted.

Green Arrow would be wise to sign off on some new sidekicks and quick, seeing as the Quentin Lance-less SCPD has been overrun by dirty cops, while new menaces now loom in the form of gangster Tobias Church (played by The Walking Dead‘s Chad L. Coleman with a gravelly and intimidating Zoom-like voice) and an extremely dark archer.

Perhaps the best news is that the fifth and final round of flashbacks are, one could argue, as compelling as the current-day narrative, as Oliver locks horns with Anatoly Knyazev and the Russian Bratva, looking to make good on his promise to… hmm, I want to say “Taiana”? (You know, the girl from the island.) Stephen Amell spent much of the summer trumpeting a return to OMG stunt sequences and brutal brawling, and he would seem to be spot-on in that exciting assessment.

Will (and why would) Dig and Thea suit up again? How will any new recruits acclimate to Team Arrow? And are any of the season-opening wrinkles the result of The Flash‘s Flashpoint timeline tinkering? Leaving us with those questions and others, the Arrow premiere suggests a solid Season 5.