In Thursday’s Grey’s Anatomy, Alex repeatedly reminded a young patient that nothing’s as bad as broccoli. However, the doctor’s own situation came pretty damn close. Not only was he charged with felony assault in the second degree, but Jo made it clear that they were through, and Bailey decided that he could no longer operate at Grey Sloan. Could his prognosis get any worse? Thankfully, no. Read on, and we’ll get to the one ray of hope with which “Catastrophe and the Cure” left Karev.

‘I SUCK AT MARRIAGE’ | While the staff of Grey Sloan picked sides in the case of DeLuca v. Karev, Maggie was preoccupied by her crush on Nathan, which had begun manifesting itself, she told Meredith (of all people!), in recurring dreams about getting it on with him in the hospital parking lot. Pierce had to start “acting like a grown-ass woman,” she finally realized, and ask him out. And the housewarming party that Amelia and Owen were throwing that evening seemed like the perfect opportunity. Mind you, Hunt wasn’t thrilled that his bride had invited his bestie-turned-archenemy-turned-who-knows-what. But she couldn’t stop herself from trying to repair their relationship. Sure, Owen was happy, she acknowledged. Yet he “could be happier.”

‘GUESS YOU CAN’T WASH THE STINK OFF TRASH’ | To take his mind off of his troubles, Alex focused on work — in particular, the case of Zack, a kid whose appendicitis posed a threat to his new kidney. Unfortunately, after pleading not guilty to the charges against him, Karev became so distracted and full of self-pity/self-loathing that he blew off Ben’s report on the patient, which would come back to bite him later. Meanwhile, Mer found herself in an elevator with Andrew, and took it upon herself to plead Alex’s case. It did not go well. In fact, by the time she was done trying to help her person, DeLuca had gotten the impression that she had threatened him and his career. When she reported the incident to Alex, she also insisted that he come to the Hunts’ housewarming — which was going to be awkward since, unbeknownst to them, Amelia had invited Jo.

‘SHUT UP, IT’S NATURE!’ | Though Harriet was, as Alex put it, “healthy and fat” and ready to go home, April couldn’t go with her, as her incision had reopened. So the new mom was heartsick at the thought of missing time with her daughter when the baby should be “smelling me like birds and dogs” and bonding with her. That night, knowing how upset his ex was, Jackson Facetimed with her so that she could sing Harriet to sleep (with George Michael’s “Faith”). Later, Richard encouraged his stepson not to just let April refuse his help. “Be persistent,” Webber told him. Off that advice, Jackson asked April to move in with him until she’d fully recovered. She balked, of course — they needed boundaries — but at least said she’d think about it. 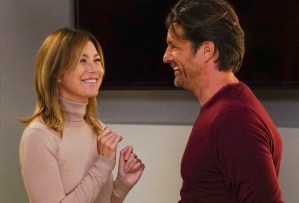 ‘YOUR BUTT LOOKS LIKE AN APPLE’ | At the Hunts’ party, Meredith cut short Maggie’s time with Nathan so that she could warn him that her half sister was going to ask him out and instruct him to “be nice and say no.” Incorrigible, he took this to be yet another sign that Grey was madly in love with him. Or at least “you’re close,” he said. “You will be” soon enough. Surprised to see Jo there, Mer suggested that she talk to Karev since, obviously, she must care. And Wison did indeed care — “about what Alex did to Andrew,” she clarified. When Jo ran into Karev, he apologized for his actions. Trouble was, “‘Sorry’ doesn’t fix” anything, she said. What’s more, when he previously called her trash, “you were trying to hurt me,” she noted. “It worked.” As a result, there was no more “you and me”… er, “them.”

‘YOU’RE BACKING THE WRONG DAMN HORSE’ | After Alex was M.I.A. (since he was at the Hunts’) when Zack’s condition took a sharp turn for the worse (since Karev had blown off Ben), Bailey forbade him from scrubbing in. She also chastised Mer for even giving the impression that she’d threatened Andrew. If Karev is going down, she said, “there’s no need to go down with him.” In hopes of setting things straight with DeLuca, Grey had him “booty up” to remove Zack’s kidney. Luckily, that didn’t turn out to be necessary — Mer and Bailey saved the organ. Afterward, Bailey informed Alex that she couldn’t allow him to perform surgery at Grey Sloan anymore. But she didn’t have to fire him, either… not if he’d work at the Denny Duquette Clinic. (It might have still been broccoli, but at least it was broccoli with cheese on it.)

‘IT’S NOT A BIG DEAL’ | As the episode drew to a close, Jo — empowered after working with a patient who named her tumor Wilma after her husband’s mistress — returned to her and Alex’s loft. As for Karev, he was drowning his sorrows at Mer and Maggie’s. To cheer him up — or at least crack him up — Grey admitted that she’d had sex with Nathan in her car. Just then, a heartbroken Maggie arrived home. She’d at last asked Riggs out on an “actual date,” and as expected — and as instructed — he’d nicely turned her down, saying that he wasn’t ready to date anyone. And for a hot second, it looked as if Mer might have dodged a bullet. Then, Pierce remembered that Nathan had said he wasn’t ready now. That didn’t mean “ever.” So, her hope restored, she’d “give it some time.”

What did you think of “Catastrophe and the Cure”? Feelings about Alex/Jo being officially over — for the moment, anyway? Jackson/April as roommates? Mer/Nathan as a potential couple? Hit the comments.