The Big Bad battle lines have been drawn.

This fall’s four-way crossover between Arrow, The Flash, Supergirl and DC’s Legends of Tomorrow will pit the super crew against DC Comics’ Dominators, TVLine has learned. Arrow and Legends EP Marc Guggenheim says he’s “taking inspiration from a DC crossover from the late 1980s known as Invasion!, which featured an alien 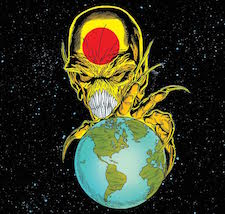 Last week, Guggenheim tweeted an image from the table read for Arrow‘s 100th episode — a linchpin of the ambitious four-pronged event — that confirmed the return of Jamey Sheridan as Oliver’s father Robert. And earlier this week, Amell released his own teaser pic that strongly hinted at a Deathstroke cameo (although it’s unclear if original portrayer Manu Bennett was under the mask).

There are also strong indications that Katie Cassidy — who was killed off Arrow last spring but now has a series regular deal across all the CW hero shows — will turn up in some capacity.