When Susan Lucci first read for the role of All My Children‘s Erica Kane — a part she’d eventually play for more than four decades and which would become emblematic of daytime television — she had no idea that the strong, flawed, brave, gutsy heroine pulled strongly from creator Agnes Nixon‘s own experiences.

“I didn’t know for a long time that the story [Nixon] was telling through Erica was so close to her own,” Lucci told TVLine. “When I found that out, I felt so honored to be doing it. All I knew was that the writing I was seeing on the page was so rich and full of conflict and history and character — and also humor. She had such a great sense of humor, and it was all there.”

In an exclusive interview Wednesday evening, hours after Nixon’s family confirmed the news of her death, Lucci shared some memories of her 40-plus-year friendship with Nixon.

TVLINE | Can you remember your first impression of Agnes?
Absolutely. And actually, I didn’t meet her; I saw her in the distance. It was my final callback audition for Erica Kane and I was put on tape that day. Fra Heflin and I were paired, always, as mother and daughter until that day. Fra was put on tape at a different time. But I was put on tape that day. And when I finished, I saw a very pretty blonde woman in an Yves Saint Laurent pantsuit which I recognized from magazines [Laughs]. She was the first woman I ever saw wearing the designer clothes that I had seen in magazines. And she had a beautiful satchel with her, and she was running down the hallway. As she ran down the hallway in the opposite direction from me, into what I think was the control room, the producer at that time Bud Kloss said to me, “Do you know who that was?” I said no. He said, “That’s Agnes Nixon.” I just had been so taken with the appearance of her. She was the first up-close I ever had to a professional woman who was a working, professional, successful woman in New York. She looked like everything I would have imagined such a woman would look like. I learned later that she was so much more than her appearance, which was beautiful and chic and modern. But she, herself, was all these things and more.

TVLINE | Talk to me about how your relationship with Agnes progressed as your time on the show went on.
The first time I was in her company outside of the studio was for an appearance that we were both asked to do early on in my career, early on with All My Children — certainly in the first year — down near where she lived. Her main house was in Rosemont, Penn. We rode the train down from New York, and that was just a thrill to be with her on the train and she told me about her Irish superstitions. I was just all ears. I was so thrilled she spoke to me that way. She asked me to come to her house to have some lunch, so I did… To go to her house, I saw a home. I knew that she had four children and she was also a very successful professional woman. And those were the things — I had no children at the time — but it was what I had always dreamed of. I wanted to be an actress and she was a writer, but I wanted to have it all. I wanted to have the career and raise the children beautifully, as she did. She was a mentor to me, as well. She was a role model. Her house was a home. And she was really part of that home. She had family traditions and love, and you could just feel all of it. And she was also a great success in her chosen field. That was all I had hoped to be, my whole life. She embodies it all.

TVLINE | Do you remember any times that she bucked you up? Or you talked about where Erica was going? Or that you celebrated with her?
Oh sure, we celebrated many times together. You know, I never really spoke to her about the writing of the character. I just felt so lucky. She would say to me, “You’ve got it.” She was so generous in her comments to me about what I brought to Erica. It was an amazing bond, because it was on the page. It was in her writing. Even before I knew Agnes, I would just think when I read it, “My god, how does someone know this?” It just made me fly. Made me soar. It was her writing. We were very much on the same page. [Laughs] I didn’t mean that as a pun, but yes, there it is.

TVLINE | All My Children taped its last ABC scene in 2011. There was a ceremony and cake, and Agnes was there. She was frail, but from all accounts, it seems like she was holding court, telling stories, still very sharp.
Absolutely she was. Our producer who was producing the show at that time in Los Angeles, Julie [Hanan] Carruthers, said that Agnes was the youngest voice in the room. Whatever room. And she was! She was modern. She was forward-thinking. She fought for storyline that was groundbreaking, that had never been done before anywhere on television. And she prevailed. It took a while, but she prevailed. When she had the opportunity and the greenlight to go ahead and write those storylines, they were rich, they were full and they were full of humanity. There are no words. She really was all that.

TVLINE | Were you in communication with her recently?
Oh yes, constantly. I’m so happy for her, and for all of us, that she finished her book. She finished her book. That will be out I don’t know exactly when, but I’m guessing very soon. In fact, last night, her son Bobby was saying that she asked him please to read the book jacket. She was supposed to sign off on it. That was last night. 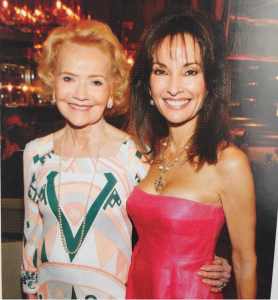 TVLINE | Oh, wow.
Yeah. Yes, as you mentioned, she had become more fragile, certainly in the last few years. But she still went to speech therapy and physical therapy and was always looking forward and ahead. She would still tell jokes! We would go out to dinner and she would still tell jokes. [Laughs] She was just spunky and fantastic in the best sense of the word… One of the loveliest women, ever.

TVLINE | Is there anything you think I need to know before we go?
Yes, one more thing. Because this is Agnes. When Bobby spoke to me, I wanted to personally put a small tribute to her on my personal [Instagram] account. So I had my autobiography with me today — I was in meetings — and I knew there was a wonderful picture of Agnes and me in there together. During one of those meetings, we had spoken of it… I knew when I got back in the car, I was going to take my phone out and take a picture of the picture so I could post whenever Bobby told me that it would be OK to do that. So I got in the car and I took my book in my hand and it fell open to the picture of Agnes and me. And that is Agnes. That was Agnes smiling on me, Agnes and her Irish superstition and her spirit and the little elf in her. That was Agnes, letting me know she was still with me.