In a recurring bit sprinkled throughout this week’s Lethal Weapon, Murtaugh and Riggs bicker about how best to describe their partnership. Are they surf and turf? Ham and pineapple? Chips and salsa? Tango and Cash? Starsky and Hutch?

Likewise, I spend a lot of the hour wondering the best way to describe this odd show to people who haven’t seen it. Action with heart? Comedy with action? Completely unbelievable stunts interspersed among fun-but-forgettable police cases? One man’s desperate cry for help flecked with one-liners and a car chase or two?

We’re now two episodes into Fox’s series reboot of the film franchise, and I still don’t know exactly how to answer when people who haven’t watched ask what it’s like. But after the second installment, I do know this: It’s a good thing that Dr. Cahill is bird-dogging the off-kilter detective, because there is a gaping hole of pain hiding underneath that mop of curls, and it’s only a matter of time before that kicky beach nudity and hee-larious drinking at work turn into a real problem for Murtaugh and the department.

GUNNING FOR HER | I’ve decided that because the cases of the week merely provide a backdrop for Murtaugh and Riggs to riff off each other, they’re going to get short shrift in these recaps. So, briefly: The guys have had three weeks off after the events of the pilot, and when they come back to work, Capt. Avery sends them to investigate a noise complaint… which just happens to put them at a house party that turns into a murder scene.

A guy (played by Jason Derulo) dies, but he’s not the target: Instead, a cocktail waitress who’s knocked up with an arms dealer’s baby is. There’s an absolutely ridiculous stunt in which Riggs — in order to save the woman in question from a sniper’s bullet — tackles her, throwing both of them off the roof of a building and through the (closed) window of another apartment across the way. 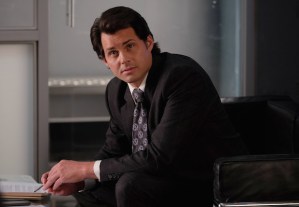 The guys eventually learn that the Bureau of Alcohol, Tobacco and Firearms agent who’s been assigned to work with them on the case is actually the arms dealer who got the cocktail waitress pregnant. And of course he abducts her from the safehouse, leading to a situation in which Riggs and Murtaugh must rescue her from a fireworks factory. (But don’t think I didn’t laugh when the captain saw the impromptu Fourth of July celebration from his office and wondered aloud where his troublesome twosome was.)

Also, look at the agent (played by Life Unexpected‘s Kristoffer Polaha, pictured at right). I ask you: Is this the hair of an honest man?

WORLD OF HURT | Elsewhere in the episode, Riggs is on his way over to the Murtaugh family home for dinner when he gets a call from his realtor in Texas: She’s found a buyer for his home. The news — and his instructions to her to “Sell it” — send him into a dark place where he blows off dinner and picks a fight at a biker bar. The next day, his face looks like a side of slowly thawing beef, and Riggs is irked that his partner couldn’t even be bothered to show up for rib night.

Through the course of the episode, Cahill repeatedly tells everyone — including Riggs himself — that the transplanted detective “is in pain” and is masking emotional discomfort with the physical kind. And that’s very clear as he dines (on a make-up dinner date) with Roger, Trish and the kids: Murtaugh’s careless line about how Riggs would make a terrible father cuts too close, and now that Rog knows that Miranda was pregnant at the time of her death, he at least has the good grace to feel bad about the stupid slip.

“I can’t fix you… I just want to help take away some of your pain,” Cahill later says to Riggs, and if that doesn’t sound like the kind of thing a woman on a show like this whispers to a wounded bird of a man on a show like this just before they slip into bed, then I don’t know what does. (For the record, that doesn’t happen… in this episode, at least.) “Sorry doc,” Riggs says. “Pain’s all I got.”

‘MAKE SURE HE COMES HOME TO ME” | Meanwhile, Trish makes it clear that she likes her husband’s new partner — which is a relief, because the dinner scenes have brought me great joy, and I would be totally OK with one per episode — but she makes him promise that “he comes home to me” every night. “Yes, ma’am,” Riggs replies… then proceeds to get Murtaugh very smashed and into a bar fight of his own. When Trish catches them drunkenly eating ribs out of the kitchen in the wee hours of the morning, she basically puts her hands on her hips and says, “You scamps.” Yeah, Lethal Weapon asks us to accept a lot, but at least at this point, I’m happy to swallow it down like Roger’s famous ribs.

Also, has someone started a Twitter account for Riggs’ hair yet? Because if not, get on that, Internet!