Well, it had to be done. Since Fear the Walking Dead’s Chris was too old to be given a time-out, Travis had to find another way to handle his son — and fast, before he got any more blood on his hands. Did you agree with the (last?) stand that Dad took in the name of tough love? Let’s review Sunday’s flashback-filled episode, then hit the comments for the debate, shall we?

‘THERE IS NO MORE GOOD, THERE IS NO MORE BAD’ | As “Date of Death” began, Madison was faced with the harsh reality of how shortsighted she had been to turn on the hotel sign — basically, a big, bright “vacancy” notice to anyone and everyone for miles. Now there was a whole crowd of people outside the gate begging to be let in! She, Alicia and Oscar were busy trying to turn away the desperate refugees when, among them, Madison noticed Travis. Then it was basically, “OK, he can come in. Sorry, it sucks to be the rest of you.”

From the couple’s reunion, we cut to where we left off at the end of “Do Not Disturb.” After gruesomely stitching up Baby James’ (well-deserved) gunshot wounds — entrance and exit — Travis gave poor Farmer Suarez a proper burial next to his family. Later, he lit into Chris, who showed approximately zero remorse for what he’d done. “This is how it works now,” he insisted with the calm certitude of a serial killer. So “I’m sorry, but I’m not sorry.” (Yikes.) What’s more, he recommended that his father be careful about how righteous he got with his new “friends.” 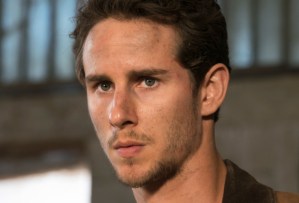 ‘I’M DEAD WEIGHT’ | Alone with Travis in present day, Madison asked him over and over where Chris was. Finally, he replied: “I had no choice.” No choice but to… what? We eventually learned the answer through more flashbacks. Though James did his best to conceal how much pain he was in, lest he be seen as a liability by his buddies, Brandon, Derek and Chris decided that, after a whole week of recovery, James wasn’t getting better fast enough, so they would just have to put him down. (Gee, nice guys.) Travis intervened, and then even guarded the patient in the barn. But the following day, Chris suckered his dad into letting him in, thus paving the way for Brandon to put a bullet in James’ skull.

As Chris prepared to leave with Brandon and Derek, Travis pleaded with him not to go, pointing out that “this is forever” and reminding him that Liza expected his father to take care of him. That’s what Travis was doing by letting Chris go, the boy responded, adding, “I’m better off without you.” With Travis, Chris had felt like he was turning into a monster. But it turned out, he wasn’t — at least in his own eyes. He was merely adapting. And, with that, the truck pulled away, Travis yelling after it, “Goddamn you, Chris!”

‘HE WAS MY SON, AND I LEFT HIM’ | Back in the present, Travis wasn’t quite as delighted as Madison that he’d seen her beacon. If he hadn’t, he never would have had to tell a soul what had transpired between him and Chris. He didn’t want her to reassure him or make him feel any less guilty, either. He was way too full of self-loathing for that. After all, as he noted, when it counted, he forgot to tell his son that he loved him. Instead, his last words to Chris were “Goddamn you.”

Later, after learning from Andres that they’d had to let in 43 refugees — some of whom weren’t doing too well — Madison sought out Alicia to reveal that her father’s death… it “wasn’t an accident.” He drove into oncoming traffic, Maddie explained, and left a note that read simply: “I love you all, but enough’s enough.” And no, Nick doesn’t know. In fact, Maddie kept it a secret — and worried more about her son than her daughter — because he always reminded her so much of his dad. Off Maddie’s apology — which didn’t include the words “I love you” — Alicia sweetly said, “I love you too.”

Finally, in the hour’s closing moments, who should show up at the gate to the hotel but Brandon and Derek — and, unless my eyes deceived me, no Chris. What gives? And what did you think of how Travis handled the Chris sitch? Hit the comments.