It ain’t easy being a Travis in a world full of Chrisses. And, in Sunday’s Fear the Walking Dead, it got even harder. Though the dutiful father tried valiantly to steer his son back from the brink of madness and amorality, the teenager did what, post-apocalypse, we’d have thought damn near impossible: He fell in with “the wrong crowd.” As a result, he wound up crossing a line over which it seems like it’ll be hard — if even possible — to cross back. What did Chris do now? Read on and find out!

HIGHWAY TO HELL | Early on in “Do Not Disturb,” while Travis hotwired a car, Chris happened upon what appeared to be a robbery/double murder, and, rather than sensibly sneak quietly away, he much less sensibly swiped some supplies from the thieves before getting busted, taking out a coupla walkers and at last exiting stage left. Since that night Dad remained blissfully unaware of what had transpired, he attempted to bond with Chris by offering unwanted reassurances that, by and by, the world would “come back to the way it was” and letting him take a crack at driving. (But, of course, the budding psycho was more interested in contemplating swerving into a possible survivor/possible walker than he was in discussing parallel parking or three-point turns.) 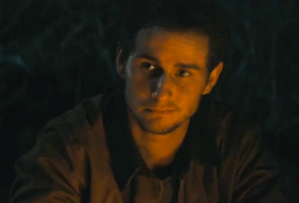 After finally the car ran out of gas, Travis and Chris were roughing it around a campfire — Liza shout-out! — when who should roll up but the robbers/murderers? Then and only then did Chris admit to his pop that, oh yeah, BTW, dinner was stolen — from these guys. No biggie, said the threesome’s leader, Brandon. “We’re not gonna hurt you over some refried beans.” On the contrary, after joining Travis and Chris, Brandon praised the “major badassery” that Chris had displayed with the walkers — or the wasted, as Brandon, Derek and Baby James called the infected (since the zombies moved like they were plastered). Connecting with this trio more easily than he ever had with his father, Chris naturally wanted to hitch a ride with them back across the border. Travis naturally did not. He suspected that they were dangerous. “Maybe,” replied Chris, “that’s what it takes” now.

PLAYING CHICKEN | Riding with Brandon & Co. only as far as the next town, Travis was so clearly displeased to see how well Chris was getting on with the frat boys that their leader attempted to illuminate for him the upside of the apocalypse. “We were less than,” Brandon noted, “but now? The end times made us gods!” Stopping at a farm, Chris pleaded with his dad to not to separate him from his new BFFs by remaining there and sending the dudes along their merry way. “They look at me different,” Chris said, leaving off words like “… than Madison, who it looked like I was gonna let get bitten, and Alicia, who it looked like I was gonna stab to death.”

Surely, Travis wasn’t going to change his mind. But, before it really became an issue, he realized that the owner of the farm was still alive and well — and probably wouldn’t be thrilled to have trespassers. When indeed the group came face to rifle with the angry farmer, Travis did his best to defuse the situation, assuring the man that they’d leave and pointing out to Chris and his cronies that they had no right to be there. Unfortunately, Chris and his cronies didn’t give a damn whether they had the right. When Baby James staked a claim by breaking the neck of one of the farmer’s chickens, the man shot the trespasser and, in turn, was fatally shot — by Chris. Afterward, Travis couldn’t even bring himself to take his son’s hand to be helped up from where he had crouched next to the victim. Travis’ expression? Battle lost. 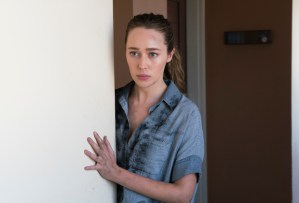 CHECKING OUT? | Meanwhile, back at the hotel, Alicia’s fruitless search for Ofelia got her driven into an elevator shaft by walkers. For a moment, it looked as if she might fall to her death (or worse), but in the nick of time, she was saved by Elena, the hotel employee that we learned through a flashback had, with nephew/co-worker Hector, locked in those ill-fated wedding guests when the father of the bride had suffered a heart attack and turned. Whoever has the keys to the hotel, she explained, could now control it by, basically, herding the walkers wherever they wanted them. Let’s do that, then, Alicia suggested — to find her mother and, while they were at it, Hector, who’d never returned from a food run. Though Elena was nervous about it — she hadn’t been downstairs since the end of the world — she couldn’t argue with Alicia’s logic. They had to team up or “die up here.”

Downstairs, amid the ruins of the wedding party, Elena confessed to Alicia how she’d “contained” the situation, thinking that help would arrive eventually. (Ah, if only… ) “We’ve done worse,” Madison’s daughter replied. So, should they bump into any vengeful survivors of the reception, “I won’t let them touch you — I promise.” Right on cue, the duo were confronted by the bridegroom and his mother-in-law, who traded Hector for the keys to the hotel. Then, to escape, Alicia released the bar full of walkers that we’d last seen interrupting Maddie and Strand’s happy hour. Almost at once, the disadvantage of not having the keys to the hotel became apparent, as Alicia, Elena and Hector were cornered by walkers. Luckily, when they cried for help, the door opened — it was Maddie and Strand!

So, what did you think of “Do Not Disturb”? At this point, are you assuming that Chris will be one of the “huge deaths” the cast teased at Comic-Con? Hit the comments.