The Flash will change things up in a big way in Season 3 with the Flashpoint alternate timeline, but one thing will remain the same amidst the disturbance: Barry and Iris’ love.

No matter how much the speedster tinkers with the timeline in the premiere episode (airing Oct. 4 at 8/7c on The CW), Iris remains “his constant,” the girl that he pines for in every reality, star Candice Patton (Iris) tells TVLine.

“You’ll get to see Barry try and woo her in Flashpoint,” the actress previews. “It’s really, really sweet. It reminds me of the pilot.”

Beyond the time trip, Barry’s choices will have life-altering consequences for his friends and family, Patton reveals. Read on to find out who’s “different” post-Flashpoint and who remembers what.

TVLINE | Let’s talk about Flashpoint, specifically from Iris’ perspective.
[She] is very similar to all of the Irises you’ve ever seen, and that’s something that we’re trying to make clear on the show. No matter where Barry goes, what timeline, what Earth, Iris is his constant in the world. She’s always the Iris that he loves. 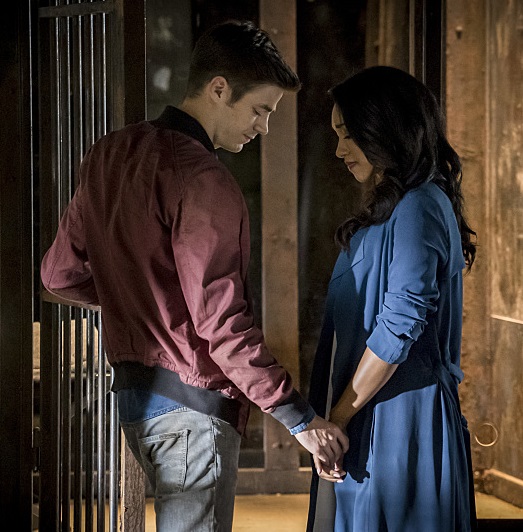 TVLINE | Do we see a different side of her? Do we see other aspects of her that have yet to be revealed in the other timeline?
Well, there are things that have changed. Barry going back in time has changed everything. So everyone’s a little bit different. If anyone is close to who they are, it’s Iris, for sure. But everyone’s been affected. When we come back from Flashpoint, you’ll see that everyone’s life is a little bit different than how we remember it.

TVLINE | What was fun for you in playing that?
The best part of that was playing Barry and me meeting for the first time. It reminds me of the pilot. When you see them for the first time together, there’s something very magical about that, and we recreate that in Flashpoint. [Director] Kevin Smith was talking about it. He said he saw the first episode, and there was something really, really special about it. I would agree. I think fans are going to really enjoy that.

TVLINE | Is Barry the only one that’s aware of the changes?
Barry is aware of changes, and we all slowly become aware of things being different in other timelines.

TVLINE | Last year, there was some discussion that Iris might be needing a little more agency in her life. Do we see that in this season?
I think she’s had it, especially in Season 2. She’s joined the S.T.A.R. Labs team. She’s helping solve meta human crimes in Central City with the rest of the team. Sometimes I feel like I’m in S.T.A.R. Labs more than any other set. So yeah, there’s definitely more of that this season, and I’m always advocating for her to be at Picture News and be the reporter. I think that’s slow going, but I’m hoping for more of that, for sure.

TVLINE | Do we see Iris being connected with any other characters that you haven’t spent a ton of time with in previous seasons?
I don’t know. This season, to me, feels a lot like all of us [are] together all the time. There’s a lot of us in S.T.A.R. Labs, the core S.T.A.R. Labs team, and then there’s me and Wally and Joe. Everyone’s kind of always together as the team. So you’ll see a lot of that. We’re all part of the team.

(With reporting by Scott Huver)