Monday’s two-part series premiere of The Good Place found Eleanor Shellstrop (Kristen Bell) awakening in the afterlife, where she was welcomed by a calming message: “Everything is fine!” Unfortunately, that message also came with an expiration date.

You see, Eleanor wasn’t technically supposed to end up in the “Good Place,” the final destination for decent, upstanding people who spent their mortal lives improving the world around them. Due to a clerical error — from which even celestial beings are apparently not immune — Eleanor’s file was mixed up with that of a lawyer who fought to keep innocent people off death row. (You know, when she wasn’t delivering toys to orphans in third-world countries.)

This left Eleanor with two choices: Fess up to Michael (Ted Danson), the architect of her particular neighborhood, potentially resulting in her immediate relocation to the Bad Place… or convince her newly assigned soulmate Chidi (William Jackson Harper) to teach her the ways of morality, thus securing an eternity in a house surrounded by creepy clown portraits.

Unsurprisingly, Eleanor’s education got off to a rocky start; Chidi’s first assignment, a full day of volunteer garbage clean-up in favor of actual flying lessons, ended with a literal garbage storm. (It was preferable to the flying shrimp and giant lady bugs that plagued the ‘hood earlier that day, but still not totally ideal.) 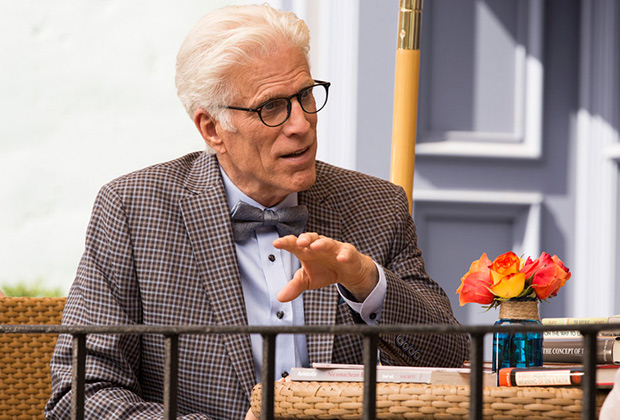 The way I see it, the biggest obstacle on Eleanor’s road to righteousness will be her poorly concealed jealousy of neighbor Tahani (Jameela Jamil), whose palatial manor dwarfs Eleanor’s clown-infested cottage. With all the self-awareness of 30 Rock‘s Jenna Maroney, the elegant, statuesque “cartoon giraffe” devotes equal time to basking in her own glory and brown-nosing Michael.

(Pause for a theory: What if Tahani was also mistakenly put in the Good Place, hence her seemingly insatiable need for Michael’s favor? Between her self-aggrandizing attitude and her total incompatibility with her designated soulmate, I wouldn’t be surprised if Tahani’s placement in the afterlife was due to an interoffice snafu. Dun, dun, dun!)

The good news, at least for Eleanor, is that no one in the Good Place really knows what they’re doing. Heck, even Michael let his own feelings of inadequacy get the better of him, resulting in that poor lady’s dog being punted head-first into the sun. This is going to be a process for everyone.

Final Thoughts: Like my colleague Dave Nemetz, I really enjoyed this premiere. I had a lot of fun watching Eleanor explore her unpredictable new world, where even the side characters — like Janet (D’Arcy Carden), the Good Place’s human Google — seem capable of carrying their own show. I was a big Pushing Daisies fan, traces of which I see in the show’s blindingly colorful palette and supernatural undertones, so I’m also digging the show’s aesthetics. Frankly, it would require a really sharp nosedive in quality to get The Good Place booted from my DVR schedule, where — unlike Eleanor — it has already earned its place.

Are you ready to join me in The Good Place? (The show, not the actual Good Place.) Grade the series premiere below, then drop a comment with your full review.