What happens when we die? It’s a big, complicated question that doesn’t really lend itself to a jokey sitcom. But NBC’s breezy new comedy The Good Place (previewing Monday, Sept. 19 at 10/9c, before calling Thursdays at 8:30 home) manages to tackle thorny issues like morality and religion while still delivering the most laughs of any new series this fall. In short, it’s a godsend.

Kristen Bell stars as Eleanor Shellstrop, who opens her eyes in a pristine white room and is informed by the kindly Michael (Ted Danson) that she has just died. (In an embarrassing parking-lot accident involving Lonely Girl Margarita Mix For One, in fact.) Eleanor now finds herself in the afterlife, and because she was such a model citizen on Earth, she’s in “the Good Place” — not exactly heaven, but close enough.

There’s just one problem: Eleanor isn’t the saint they think she is. She’s actually a selfish monster who ended up in the Good Place by accident, mixed up with a death-row lawyer with the same name. Now she’s the lone rotten apple in an afterlife filled with squeaky-clean do-gooders. Kristen Bell helps sell the premise; she’s been a thoroughly charming TV presence since her Veronica Mars days, and her natural appeal helps us root for Eleanor here… even though she’s kind of a jerk.

Danson is great, too, as Michael, the Good Place’s benevolent caretaker. In an inspired sequence, he explains to newcomers how every action they took in their lives, positive or negative, was tallied and used in their ultimate judgment — mathematical karma, if you will. The flurry of positive and negative actions displayed on screen (“End slavery” is good; “Tell a woman to ‘smile'” is bad) is just one of the fun Easter eggs packed into the pilot; get ready to wear out your pause button trying to catch all the gags. 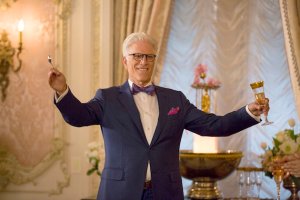 Those tightly packed jokes and the show’s smart, irreverent tone are all thanks to creator Michael Schur, who earned a lifetime pass from me with Parks and Recreation. After seven seasons of grounded small-town comedy in Pawnee, Schur gets to let his imagination run wild here, and he’s clearly had a lot of fun building a heaven-like universe with frozen-yogurt shops on every corner. Plus, he’s recruited a promising supporting cast to join Bell and Danson, highlighted by William Jackson Harper as Eleanor’s innocent soulmate Chidi and Jameela Jamil as the annoyingly chipper Tahani.

Now if the show’s premise reminds you a bit of the 1991 Albert Brooks film Defending Your Life, well, you’re not alone. The Good Place’s utopian surroundings (a clothing store called Everything Fits!) and Eleanor’s nagging self-doubt are indeed highly reminiscent of that film. But you have to admit: It’s a meaty premise with lots of fascinating possibilities to explore. And hey, Defending Your Life: The TV Series sounds pretty good to me.

The pilot does veer off in a strange direction in the final act, though, with Eleanor’s unauthorized presence in the Good Place leading to some surreal (and terrifying) consequences. It’s not clear just how special-effects-heavy the show will be on a weekly basis (only the pilot was available for review) — and it’s also not clear how Eleanor’s story can be stretched to a full season, let alone multiple seasons.

But NBC has already announced The Good Place‘s first season will be just 13 episodes, so that gives Schur and company a nice, compact space in which to tell their tale. And with the comedy dream team of Schur, Bell, and Danson on board, I’m looking forward to spending eternity at least six and a half hours in this magical wonderland.

THE TVLINE BOTTOM LINE: If you’re looking for laughs this fall, The Good Place is a good place to start.