TNT’s Rizzoli & Isles — as in Jane and Maura, played by Angie Harmon and Sasha Alexander — closed their final case together on Monday, before leaving the Boston PD behind to embark on new, separate adventures.

As the detective and M.E. went about divining who was behind the internal decapitation of an abusive husband, Kent surreptitiously recorded goodbyes from Korsak, Angela and Frankie (whose accidentally spilled the beans about his and Nina’s engagement when the camera was running). At episode’s end, the montage — Jane’s own farewell message included — was played for all at The Dirty Robber, before a final twist revealed that Quantico-bound Rizzoli would be joining Isles for the first several weeks of her new life in Paris.

TVLine invited Jan Nash, RizzIsles‘ showrunner for the last three of its seven seasons, to share her thoughts on putting the procedural to bed.

TVLINE | At the time 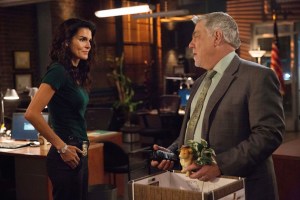 that you found out that Season 7 would be just 13 episodes, did you know it was also the final season and were able to arc it out accordingly?
We didn’t know, but we certainly suspected. And when we started thinking about the stories, we did sort of think about them in the context of “If we tell these stories, will they lead us to something that could be an actual end to the series? And if it’s not the end, could we pull back from it and have an additional season?” We felt like we had arcs that would allow us to do that — though obviously we would have made some adjustments to accommodate another year.

TVLINE | Was this all your design or did series creator Janet Tamaro leave behind a dusty envelope that said “Open in case of emergency”?
[Laughs] She did not leave behind a dusty envelope. To Janet’s credit, when she decided to leave the show and put it in other people’s hands, she in a very decent and I think probably difficult way allowed us to do what we needed to do.

TVLINE | Sasha and I had an interesting conversation about the decision to either leave the characters where they’ve always been, doing what we’ve known them to always do, or you can do what you did and send them off in new directions, demonstrating growth. What were the pros and cons as you decided how to approach it?
You could do exactly what you said and just let it sort of be the same, but from the perspective of both the actors and the writers, it makes for potentially a lot of stories that feel very much like the ones that came before. And that doesn’t give the actors the opportunity to stretch new muscles and do things that make a show that has run for a very long time continue to feel alive and vibrant and new to them. So we fell on the side of allowing the characters to have challenges that change then, and hopefully those experiences help inform the relationships that they have.

Also, this is a very rare thing, a rare bird, in the world of television. This is a show that has been on the air for seven seasons, we made 105 episodes, and things have happened on this show that don’t happen on other shows. This is a group of people that lost somebody [original cast member Lee Thompson Young, who died in August 2013] who was very, very dear to them. We the writers and, I think, ultimately the actors felt like they had things that they wanted to say about this experience, so we really wanted to give them a chance for the characters to talk about what this time has meant to them.

TVLINE | That little “button” at the end, with the surprise plane ticket — was that your way of appeasing any fans who might be upset that Maura and Jane were going separate ways? To say that no matter where they may be geographically, these two friends who always find their way to each other?
You used the word “appeasing,” which wouldn’t have been my word. We went toward the finale with the idea of showing that these two women are best friends, and no matter what happens in their lives, that will never change. You have these two strong women, these incredibly compelling characters, that have been engaged in this relationship for a very long time, and yet the characters are people who should be allowed to grow, to move forward in their lives. And despite that, when the show goes to black, you can rest assured that these two people will be in each other’s lives forever.

TVLINE | Did you consider any alternate destinations for any of the main characters?
Obviously when we started talking about the final season, we talked about a lot of things. Ultimately, over the last three years, and even in the time before that, we laid in various things that set up these arcs— Korsak retiring, Frankie and Nina getting engaged, Angela moving forward as an independent woman, determined Jane making the ultimate choice about how to protect the people she loves, and Maura realizing that “hiding” in the medical examiner’s office wasn’t a choice she bound to. All of those things had been set up in the show over these seven years, and they felt like the right choices to us. We were always thinking about the finale and ensuring that it would have laughter and tears, and these stories allowed for that. 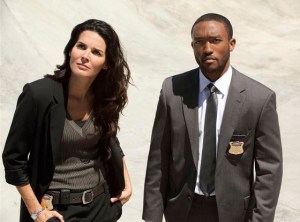 always intend to find some small way to acknowledge Lee Thompson Young (who played Detective Barry Frost) in the finale?
We wanted, to the best of our abilities, to allow for things that had been important in the show to live in the final season. There had been characters that for reasons of clarity and story direction that had not been as prominent as they had been in earlier seasons, but we wanted to make sure that we honored Tommy and T.J., we wanted to make sure that we honored Hope, and we wanted to make sure that we honored Lee. I wasn’t here [when he died], but it feels to me that Lee’s death is one of the most powerful parts of this experience for this group of people, that the experience of loving him and losing him and grieving together really made this group of people the family that it ultimately was. It would have been wrong not to reflect on that.

TVLINE | Who got most emotional on set as this was winding down? Because Angie’s tears near the end looked very real.
Because of the videos, I think that everybody really had a sense of something coming to an end. But because we knew it was happening, which was a real blessing, we in fact had the opportunity to really celebrate the show. The fact that the 100th episode was so close to our finale gave us the opportunity to celebrate that achievement, and then spend the next five episodes getting ready to say goodbye. So, I would say that everybody got emotional. I think I cried three or four times on the final day of shooting.

TVLINE | Lastly, was there anything you just couldn’t fit into these final episodes, anything that got cut for time?
The finale did end up being very long, and we cut three scenes — and to be honest, they are three scenes that if you’d been short and couldn’t have cut them you would have wished you could, because they seemed to get in the way of the emotional flow. They were mostly case-related, informational, so we ended up cutting that. But in terms of the emotional structure of the episode, I hope — and like I said, I haven’t been here from the beginning — that the actors felt like their characters had had an opportunity in Season 7 to explore some new things, to grow, and ultimately to say goodbye. Every single person involved, from the writers to the producers to the actors to the crew to the people in post-production, gave it their all. To use a sports metaphor, they “left it on the field.”

TVLINE | And you left the door open for a TV-movie down the road, where you can show us those four weeks in Paris. Because you just know Jane and Maura will stumble across a dead body….
We’re ready! Let’s go to Paris.