“To be totally honest, it’s other people’s turns,” Cash tells TVLine, teeing up a run of episodes that will find co-stars Chris Geere, Kether Donohue and Desmin Borges encountering life-changing moments for their characters. “This is an ensemble show, and it’s not going to be about Gretchen’s struggle every season — nor should it be.”

She continues, “Other people have some intense stuff to deal with, and both Aya and Gretchen are there to support that this season. That’s important, that each character you get to know in the way that I was lucky enough to get to portray Gretchen last year.”

Geere, whose Jimmy experiences a long-awaited professional high and a deeply troubling personal low in the first two episodes, describes the season as “an exploration of human emotions and how most of the time, we can’t deal with them.” He grins. “You learn how to cope with them.”

But this all makes it sound like Season 3 is more Sturm und Drang, less Sunday Funday. Rest assured: The characters remain the same self-absorbed Californians we love and ridiculous things, such as Donohue’s Lindsay spending most of Episode 2 dressed as a sexy nurse, still take place.

“It’s like Lindsay is still Lindsay and oh, right, she happens to be pregnant,” Donohue says, laughing.

Read on for more Season 3 scoop:

* Despite Jimmy’s reluctance to repeat his drunken vow of love — and Gretchen’s determination to get him to do so — the show’s central couple is in a rather solid place in the premiere. “Jimmy and Gretchen thrive off distraction,” Geere says. “That’s how they both work together. When something serious happens, the other one goes, ‘Hey, look over here!’ and then they’re on to something else, so they never deal with any[thing].”

* While of course Gretchen’s depression isn’t gone, “It’s been a lighter load for me this season, which is lovely,” Cash says. “It’s fun to feel a little more of Gretchen from Season 1, and who that girl is, because she still exists.” The character also enters into therapy with a provider named Justina, played by Orange Is the New Black‘s Samira Wiley, who “puts Gretchen in her place in a way that no one ever does, really.”

* The premiere episode ends with Lindsay making a rather shocking — yes, even for these folks — decision and then immediately following through on it. While we can’t tell you exactly what happens, Donohue says that the reading the script for the first time gave her “the same feeling I got when I read that she artificially inseminates herself with a turkey baster,” she says, laughing. “It’s almost like an alcoholic having a higher tolerance. Like, if artificially inseminating yourself with a turkey baster was like an alcoholic having five Jack Daniels, this was like, ‘Oh s—t. The alcoholic just had 10 Jack Daniels!'” 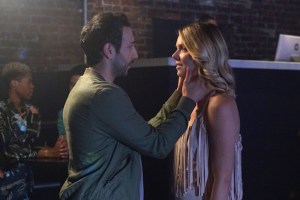 * Borges’ Edgar is still with Dorothy at the beginning of the season, and that relationship causes the military vet to make a decision that is likely to have big ramifications as the episodes roll out.

* Speaking of Edgar, about his weirdly budding romance with Lindsay last season? “It’s like they’re friends now, you know?” Donohue says, implying that once you’ve seen someone burn her hoo-ha while trying to inseminate herself with a turkey baster, it’s tough to go back. “They have a bond that’s just there, and they’re just kind of pals in a ‘I get you’ or ‘We’ve been through that, we get each other’ kind of thing.”

* Make sure to enjoy this year’s Sunday Funday, because it’s likely to be the last. The scavenger-hunt-themed episode will offer up “some fun Lindsay/Gretchen arguments, which I know people like,” Donohue says.